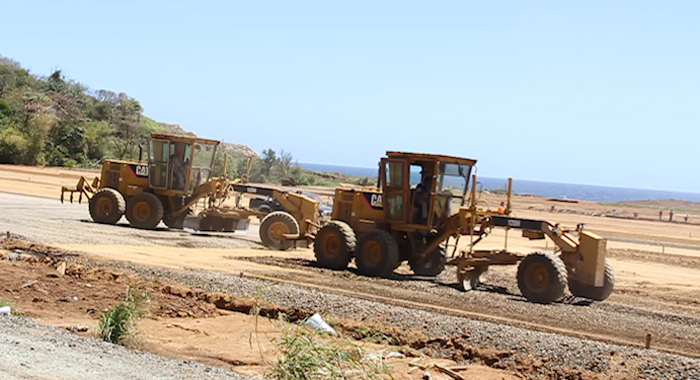 Prime Minister Ralph Gonsalves has attempted to pour cold water on the fact that a section of the base material laid down on the runway of the Argyle International Airport did not meet the international standard.

Further, at a press conference this week, he lashed out at editor of The News newspaper, which published last week a story about the development.

He gave the following explanation of the development:

“Something, months ago, where they were laying down base material, hadn’t start to pave yet, and the contractor, that is to say, the Cuban team which is doing the work, according to the independent quality assurance unit at the airport, when they went and saw that portion, just a portion, said, this is not being done in accordance with the international specifications as laid down in the annexes of the International Civil Aviation Organisation.”

He said it is not an American standard, contrary to what Jennifer Richardson-Herbert, communications officer at the International Airport Development Company, is reported as having told The News.

Gonsalves sort to praise the quality control unit at the EC$700 million airport, scheduled to be completed by yearend.

“What should give everybody in this country faith and comfort that it’s a quality work being done, is that the quality assurance unit picks it up.

“Now, they could have gone there and in five years time you have to dig out that part and do it over. They said, ‘No, it didn’t meet –.”

Gonsalves further said that his government has spent EC$500,000 on the laboratory, which, he said, is well staffed with good professionals, including professionals from Cuba.

“And they do all the testing and the quality assurance unit is independent of those who are doing the contracting work, so that they can say that this piece of work which you are doing does not meet, in our view, the international standard as laid down, and they have the specification.

“The contractor could argue with them until they are blue in the face, because the quality assurance unit reports not to the contractor, but to Dr. [Rudolph] Matthias, who is the chief executive and to the board.

“You think we will be building an airport without quality assurance? I want to find out if airports being built all over the world, you don’t have, occasionally, a problem,” Gonsalves further said.

He added that there are hiccups even when one is building a house.

“Now, when I speak on that issue in that way, is almost, I would expect, something come off from your eye. I say boy I didn’t think ‘bout it this way, I didn’t see it that way, but that’s not how it is being presented.

“Because what is happening, there must be no hiccup, absolutely none. And if there is the slightest hiccup, because is Ralph building it, because is ULP (Unity Labour Party) building it, you gone on a political line.

“What I can do is to set up systems. I am not a civil engineer. I don’t know the details of the application of the standards. But there are professionals whom you have, and you set them up in a way that they check. So you have a check, and that’s the issue which I want to bring to you.”

Gonsalves further noted that the IADC has said that correcting the problem “is not causing any delay to talk about, and the cost is relatively minimal.

“And it woulda cost more if you turn a blind eye,” he said, adding that the work is continually being done under the supervision of the regulatory body, the Eastern Caribbean Civil Aviation Authority, which would have to certify the airport before it becomes operational.

“… that is why it is important that you work with them all the time and apply the right set of rules,” Gonsalves said.

He further said that a consultant is being hired by the IADC “to begin the process with all the paper work in anticipation of the imminent completion” of the airport.

“So we can have all the paper work when we go to our regulatory body with anything,” Gonsalves said.