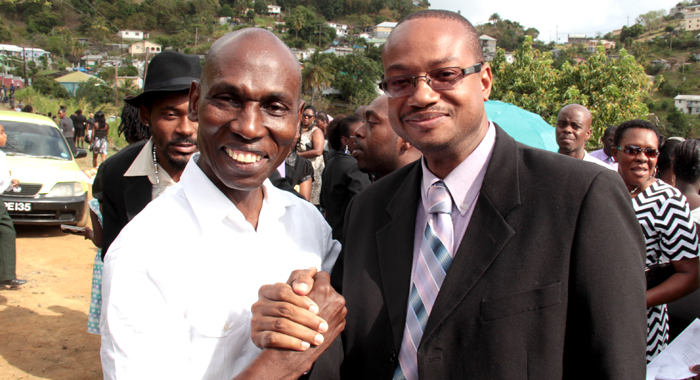 The ruling Unity Labour Party (ULP) will use the results of a poll — rather than a meeting of constituents — to decide who will be the party’s candidate in the next general elections, constitutionally due in December 2015.

Sen. Jomo Thomas, one of the persons vying to be the candidate, made the disclosure on his radio programme on Wednesday, saying that the party feels “it might be too fractious for us to have a meeting of constituency members”.

Thomas, a lawyer who is also Deputy Speaker of the House of Assembly, and Grenville Williams, also a lawyer and Director of the Financial Intelligence Unit, are contending to be the candidate.

Their bids have seen party supporters calling on each other’s camp to stop the distribution of posters and pamphlets supporting the respective candidates.

Both candidates have said that they are confident that they will be chosen to run against the New Democratic Party’s Nigel “Nature” Stephenson — a former teacher — who will vie for a second consecutive term as MP for South Leeward, which the ULP considers among the marginal seats.

“…the party has decided to go scientific and to have a pollster from outside St. Vincent and the Grenadines who would come in an do an assessment of the constituency, who the constituency people want, how do the candidates match up with the candidate of the opposition New Democratic Party,” Thomas said.

“And we know that that some forces were on the ground making that assessment and the anticipation is that anytime now, a decision would be made as it relates to who will carry the ULP banner in South Leeward,” he further said.

Thomas restated his support to whoever emerges as the ULP’s candidate.

“That is my commitment, my undertaking, and I am willing to do that. But I am absolutely, absolutely confident that based on the work that we have done over the last three months that I would be the ULP candidate.

“I think I offer the party the best chance of emerging victorious in South Leeward. I think I can best articulate the party’s policies and positions and ideas, project into the future as to what we did and what we would continue to do. And this is why I am so confident.”

Thomas said that he has canvassed the entire constituency and has received a positive response.

“The response has been very, very good and we don’t expect anything but a resounding yes from the ULP people in South Leeward as to who will best match up against the NDP in the upcoming general elections,” he told his radio audience.