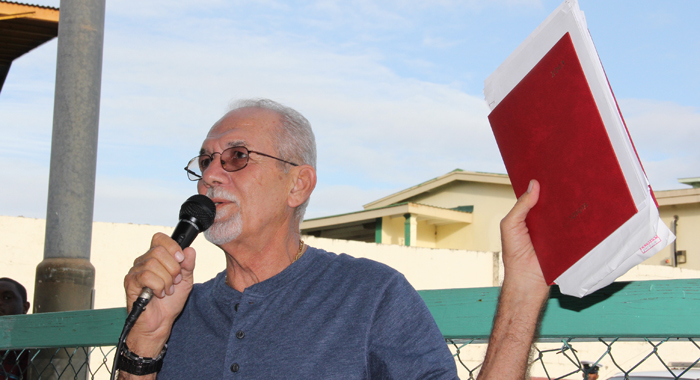 Minister of Transportation Senator Julian Francis holds up decade-old notes of meeting with NOBA and says he is tired of the one and off discussions. (IWN photo)

Minister of Transportation Sen. Julian Francis has told minibus operators that a strong organisation would be more appealing and better positioned to negotiate with the government.

“If you get yourself organised and you become a forceful unit, every person who owns a minibus would want to become a member of your organisation. But right now, you are not organised, they won’t want to get involved with you,” he told a meeting of the National Omnibus Association (NOBA) on Sunday.

Francis, who is general secretary of the ruling Unity Labour Party, said that an organised minibus association could become stronger than him politically, but added that he is tired of the “stop and start” discussions, and pledged time to ensuring that the issues are dealt with.

“I am prepared to put in the transport officer and another member of the staff. The police, I know, will put somebody in it and you can have a body to discuss the progress, like we did in 2004, which feel apart,” he said, adding he would also attend meeting.

He, however, pointed out that in the last decade the only discussion between Ministry of Transport and NOBA related to the raising of fares.

Francis said that farmers and fisherfolk get concession on vehicles and engines, respectively, because they are organised.

However, anyone can buy a personal vehicle and register it as H (for public transportation), he said.

Among other things, minibus operators are asking for concession on tyres and fuel.

“How do you identify a bona fide registered minibus operator? You therefore have to get yourself organised into a body,” he said, suggesting that out of the meeting a committee be formed.

Sunday’s meeting was a continuation of discussions that began in 2003.

NOBA is also asking for an express route, through Cane Garden, out of Kingstown, and out-of-city bus stops near Milton Cato Memorial Hospital, and FirstCaribbean International Bank.

“I can’t take right now to the cabinet a proposal for duty free on tyres,” Francis said, noting that the proposal was asking for concession on one brand of tyres.

Francis further said that Anthony “Code Red” Bacchus took over the presidency of NOBA, there has not been a general meeting with elections being held.

“… we need to elect a current executive of the minibus association.”

He further suggested that the meeting not be the last, but that they continue and try to organise through various districts.

He said that in his discussions with NOBA he has asked to the group to show where and why minibus operators are losing money.

Francis told the drivers to present statements of income and expenditure rather than simply complain about how much it cost to operate a minibus.

He further noted the decorations, including graphics and rims, and sound system in vans.

“Surely, if you are not making that kind of money, you can’t put on that graphics. …

“Do not let the authority or anybody have the advantage on you in these areas.

“Because if a fella come and tell we, well he losing money, and if he get duty free on he tyres he go break even, but when I see his van, is the prettiest van in town, it has the best rims and the heaviest sound system. So, who is buying that, the girlfriend or somebody else? Has to be the money that you are making from the van…

“An independent person assessing you will say you are not presenting the correct picture,” Francis said.

The transport minister further urged drivers in some parts of the country to invest in 40-seater buses.

It will cost money, bit if four of them get together and buy 40-seaters, when they move out of Kingstown, they will be taking 160 persons. When four 18-seater move out it is only 72 passengers.

“You still have more than half of what you have moved out waiting for you at Mahogany Square,” he said in reference to the area along Murrays Road, where hundreds of persons wait for buses on evenings.

Francis further reminded the meeting of the proposals that were made during discussions between NOBA and the government 10 years ago.

One reply on “Minister urges minibus operators to strengthen association”