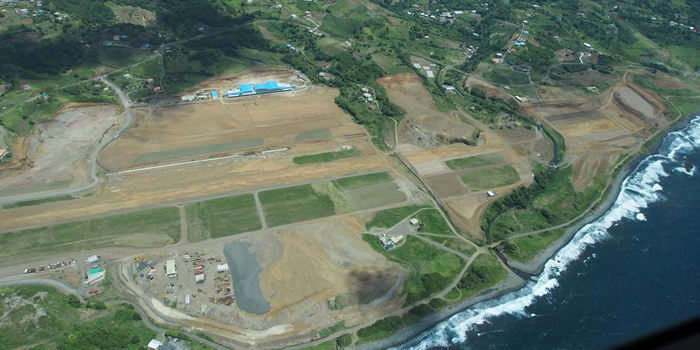 EC$379 million has been spent so far on the construction of Argyle International Airport. (File photo)

A total of EC$379.26 million has been spent on the construction of the Argyle International Airport, which is expected to be “substantially completed” by the end of this year, Prime Minister Ralph Gonsalves told Parliament on Thursday.

Gonsalves, who is also Minister of Finance, further said the value of the work done so far is EC$557.49 million.

In responding to a question from Opposition Leader Arnhim Eustace, Gonsalves pointed out that the difference between the amount spent and value of works means that there is a substantial in-kind contribution of EC$178.2 million.

“Mr. Speaker, the amounts which have been committed so far on expenditure over that number by the IADC (International Airport Development Company) is $43.1 million,” he further said.

He said the airport can be built without the boarding bridges, which cost EC$5.1 million.

“But if we are building a modern airport, particularly since we are in a country that has a lot of rainfall, to facilitate — you know the problems in some places where you come off the plane but you   can’t get to the airport.

Monies are still to be spend on the control tower, air rescue and fire fighting building, cements for concrete works, and, among other things, retrofitting of terminal building, including the areas to fit the boarding bridges.

“I have been advised by the IADC, that what remains to be spent, apart from the commitment of those items of expenditure I have outlined would be in the region of EC$160 million, which is reflective, broadly, of the ballpark I gave to Parliament last year.”

Gonsalves said the IADC expects the airport to be “substantially completed” by the end of this year, and the expected expenditure would be EC$583.5 million.

“Mr. Speaker, the value, of course, would be far more than that, because of the in-kind contribution.”

Gonsalves said there have been delays in the draw down of some monies, including US$5.5 million from the sale of land in Canouan as a result of difference that had arisen between the two principal partners, which resulted in the amount being outstanding to the government.

Gonsalves, however said, he expects that US$5.5 million to be paid soon, while another US$3.7 million will become due at the end of July.

“When you have tight budget and you are short of five and a half million dollars at a critical period, you experience some delays,” he said.

He further said that the government has received EC$25 million of a EC$40 million loan from Venezuela.

The government had hoped to receive the $30 million by end of May, but now anticipates that the outstanding $15 will be paid by the end of July.

Gonsalves said his government expects the airport to become operational by the middle of 2015.