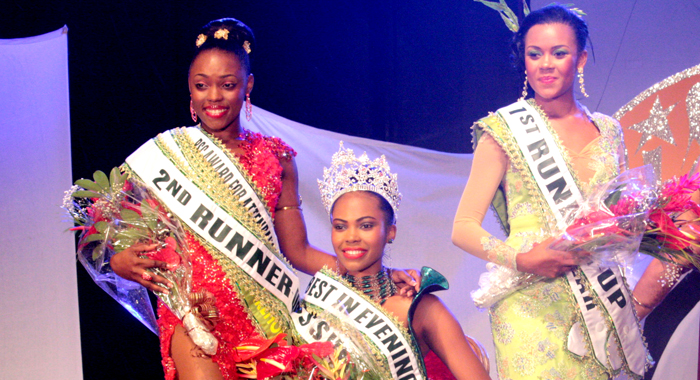 When Lowmans Leeward resident Shadeisha George signed up for the Miss SVG 2014 pageant alongside Shackell Bobb and Karla Gellizeau, she knew she was in for some tough competition.

George, 21, was entering her first pageant even as Bobb had entered five, one of which she won (Miss P’Tani 2011). Gellizeau had won the Miss West St George 2012 crown and had represented St Vincent and the Grenadines in Nevis at the Miss Caribbean Culture pageant.

But George, who was sponsored by telecommunications provider, LIME, trumped the two beauties and five other contenders for the Miss SVG 2014 title at Victoria Park on Saturday.

She also won the Eveningwear and Talent segments of the show, while Gellizeau and Bobb, won the swimwear and Interview segments, respectively.

(See photos of the entire show)

“Having been a classmate of Shackell’s, I really do believe that she posed some competition, as well as Karla Gellizeau, because they [were] the contestants who had all this pageant experience coming into the pageant.

“I had zero,” George, who also won the talent and eveningwear segment of the show, told I-Witness News after her crowning shortly after 1 a.m. Sunday.

She said that all the work she had put into preparing for the show had paid off. “I am extremely motivated and driven. If I set my mind to something, I am willing to achieve it,” she told I-Witness News.

As the post-show interview began, a celebrating mob, blowing whistles and shouting, congregated at the front of the stage. Asked how she feels to have won, George paused for a few moments as silent tears streamed down her cheek.

“I am so elated. My friends are actually in front of the stage doing what they have done throughout this entire competition. They have been extremely supportive,” she said after composing herself.

George told I-Witness News that her greatest moment of the show was performing her talent.

“It was something that I always wanted to do, simply because it provided that wow factor for St. Vincent and the Grenadines,” she said of dance routine, “Footprints”, that saw her dangling from cloth suspended from a tall frame.

The cloth is said to represent the different struggles and the resilience needed to push through them.

“It is a talent that has never been done before here, and in order to ensure that I sealed that category, I ensured that I performed to the best of my ability,” she said of the piece.

Bobb was probably George’s closest contender in this category of the show.

She performed a piece — “One person can influence a generation” — that dramatized what she portrayed as the negative influence that Jamaican dancehall artiste Vybz Kartel has on young people.

Bobb’s piece was a positive message wrapped in a very entertaining package. However, George did have the “wow” factor in this category, since she could have as effectively executed the talent piece of any of the other contestants, but her own performance indeed required some special talent.

“This was the category that I was not worried about at all, because I had so much faith in her and I knew she would deliver — what she has always done over the years,” she said of Baptiste, Miss SVG 1999.

Meanwhile, Bobb won the interview segment, in which, based on her biography, she was asked if she thought physical education should be mandatory in secondary school.

“I do believe that it should be made mandatory. I have always been athletically inclined and I believe that participating in a sport helps you to relax; it helps to take you away from the stress of the schoolwork you have to do. In addition to this, it helps you to develop your self discipline and helps you to be a well-respected individual,” she responded.

She responded: “I believe that women [have] become more advanced. However, I do not believe that the fact that they are taking up leadership positions and taking up different jobs as the men, it does not affect life, because we are now capable of handling an 8 to 4 job and then going home to our families to nurture our families and instill values into their lifestyle.”

And, with the Miss Carival pageant five weeks away (July 4), George said she is going to prepare for the regional show, a major Vincy Mas event, “the very same way that I did for Miss SVG.

“I intend to be very disciplined and just do my best to represent my country,” she told I-Witness News.

Among the persons celebrating with the beauty after her crowning was her father, Garvin Mattis, who said he encouraged her to enter the show and was looking forward to her winning.

“From every since I always hear I have two daughter which most likely are carnival queens. And I eventually talk her into the show and even prayed for her before I left home,” he told I-Witness News.