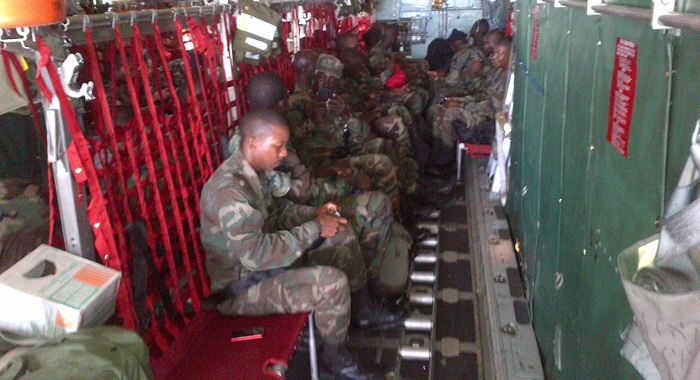 Military personnel gear up for Tradewinds 2014.

ST. JOHNS, Antigua – Military and security forces from around the Caribbean have joined the United States and Canada for maritime security and disaster response training as part of Exercise Tradewinds 2014, which began earlier today.

Tradewinds is conducted in two main phases. Phase I, the maritime phase, which will be held in Antigua and Barbuda June 1 through June 10, and Phase II, the land portion, which will be held in the Dominican Republic June 16-25.  The exercise supports the Caribbean Basin Security Initiative (CBSI), a regional security partnership between CARICOM member states, the Dominican Republic, and the United States of America.

Taking part in maritime training are units from the host nation, Antigua and Barbuda Defence Force (ABDF), as well as national police and coast guard units from The Bahamas, Belize, Dominica, Grenada, Guyana, Jamaica, St. Kitts and Nevis, St. Vincent and the Grenadines, Suriname, and Trinidad and Tobago.

Some of the participating vessels are interceptors and patrol boats provided to partner nations as part of CBSI’s “Secure Seas” programme. The crews of these vessels will train alongside members of the United States Coast Guard and the Royal Canadian Navy, which is also providing a fleet diving team and the Kingston-class maritime patrol vessel, HMCS Summerside.

The training during Phase I will focus primarily on maritime security and countering transnational organised criminal groups on the high seas, as well as training to improve the ability to respond to natural disasters and provide humanitarian relief. The exercise will provide realistic simulated disaster events to test the Antigua and Barbuda National Office of Disaster Services (NODS) as well as the Caribbean Disaster Emergency Management Agency (CDEMA).

“Tradewinds is vital to the nations of the Caribbean, Canada, and the United States in order to collaborate against common threats to our peoples and the way we live our lives, as well as to sharpen our collective responses to deal with humanitarian crises, natural disasters, and pandemics,” said Gen. John Kelly, Commander of the United States Southern Command (SOUTHCOM), which administers the event. “The United States is one of many equal partners in the Caribbean, and SOUTHCOM is interested as much in human rights, developing deep and lasting partnerships across a large range of issues, diplomacy, economic development, and environmental matters, as it is in military topics. Like the other nations participating in Tradewinds, we place a very high value on this training and the understanding and cooperation it fosters.”