FIFA writes Coombs about use of US$78k, EC$170k moved among bank accounts 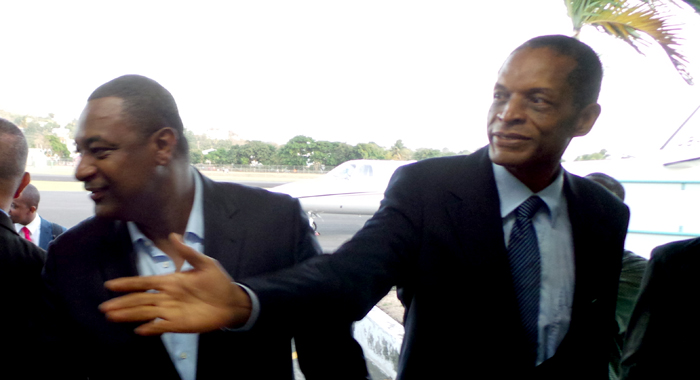 President of the St. Vincent and the Grenadines Football Federation (SVGFF) Venold Coombs has dismissed as a normal query a letter from football world governing body, FIFA asking for “explanations and/or documents” regarding the use of US$78,000, transfer of EC$170,001 among bank accounts, and a Supreme Court garnishee order on the Federation’s bank accounts, including the FIFA programme account.

In the May 5, 2014 letter, obtained by I-Witness News, FIFA’s general secretary Jerome Valcke asked for the explanations/documents to be submitted by May 20, 2014.

Valcke said a KPMG audit report concerning the development programme funds that the SVGFF received from FIFA in 2013 “is not satisfactory at all and showed major deficiencies which require further clarification”.

The letter further said there were no employment contracts for members of the coaching and administrative staff of the SVGFF.

“The budget is not properly monitored and there are huge deviations between the approved budget and the disbursed amount per category without FIFA approval.

“Furthermore, SVGFF did not respect the obligation to spend at least 15% of the FAP funds on women’s football,” the letter said.

It further said that the FIFA General Secretariat has to inform the FIFA Finance committee about “the non-compliance with FIFA rules and regulations.

But Coombs sought to downplay the development, saying, “FIFA is very meticulous with how things go.

“FIFA raises queries for the simplest of things because they are up there in their own environment and different parts of the world have their own different things,” Coombs further said, adding that some countries do not take money from FIFA “because of the strictness involved and how the scrutinise things so much”.

He said that the “issue” with the account is that the SVGFF has four accounts at a local bank, and if one account is low on funds and a SVGFF cheque is issued, the bank will honour the cheque by using money from another of the SVGFF’s accounts.

“What the bank does, rather than bounce the check, rather than return it, they deduct it from the funds that you have. Therefore, therein comes into the picture there the FIFA money. … FIFA don’t like that,” Coombs told I-Witness News, adding that FIFA looks at this “as money being spent differently.

“They term it comingling. So it‘s not that you are doing anything wrong, dishonest or fishy. It’s just that bank not really bouncing your check. They just deduct it from the funds you have, and, of course, there is a fee for that,” Coombs said, adding that all the cheques were for “legitimate costs that you use…”

Coombs said FIFA is not familiar with that banking procedure, which, “in itself, is an offence to FIFA, because they don’t know that down here that is something that is quite legitimate within the banking system.

“To them up there, they are looking at it that the stated way in which their money should be spent, as is listed, they are not seeing that. So we have explained it to them, we have on-going discussions with them, so they are going to meet on it and I will properly explain to you what is the outcome of that meeting.”

Coombs said he has “checked” with others connected with his finance committee “and they are working to rectify the situation with the people up there.

“Because they up there not aware of that (the banking procedure). Who in the Caribbean understand that and I have reported to them and things are being worked on.

He, however, noted that the document obtained by I-Witness News  “is an internal document” and added that whoever leaked it to the media “should resign.

“The individual who put such a document outside should resign,” Coombs said.

4 replies on “FIFA writes Coombs about use of US$78k, EC$170k moved among bank accounts  ”