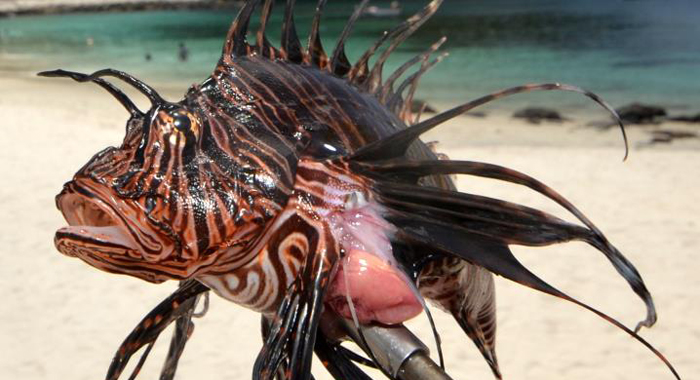 Indigo Dive has removed 3,000 pounds of lionfish from the western coast of St. Vincent in the past 30 months.

A locally produced soca song will be used by Reef Environmental and Educational Foundation (REEF) at their events across Florida and the Caribbean to help to promote the removal of the lionfish, an invasive species, from the waters of St. Vincent and the Grenadines and the region.

The song, “Lionfish” written by Mark Cyrus and performed by DJ20, was released in time for Vincy Mas 2014 and St. Vincent’s first lionfish derby, on June 9 at Calliaqua Playing Field.

The Parks, Beaches and Rivers Authority is organizing the derby, in collaboration with the Fisheries Department.

Cash prices of between EC$400 and EC$200 dollars will be given away for the most lionfish caught, as well as EC$250 for the largest and smallest lionfish, respectively, in addition to other cash prizes for all winners.

Among the divers who have been silently waging war against the invasive species is Kay Wilson and her team at Indigo Dive.

Wilson told I-Witness News that she appreciates the attention that lionfish has been getting in the media, but noted that the perception is that lionfish is poisonous.

“This is not true! Lionfish can give you a very nasty sting if you don’t know what you are doing, however, once the spines have been removed, carefully, the remaining meat is delicious, very similar to fresh cod or snapper,” she said.

“It’s jam-packed with good-for-you nutrients. In fact it has the highest concentrations of Omega 3 oils, which promote good mental health,” Wilson further said, adding that the concentration of omega 3 oils in lionfish is higher than even blue fin tuna.

Wilson said that over the last two and a half years she and her team have been responsible for removing over 3,000 pounds of lionfish from the waters of the leeward coast of St. Vincent.

“Some of the fish we sell to restaurants in the Grenadines, the proceeds of which fund free diving for residents to continue the cull, and free dive training for local fishermen.

“The rest we give away to needy families, and to folks who would like to try lionfish but are too wary to spend their own money on something that they are unsure of. I also used some of it to promote awareness by commissioning Mark Cyrus to create a lionfish anthem for Vincy Mas and the upcoming derby,” she said.

“We are now getting to a point where local fishermen are competing with us, and we are finding it harder to bring in the bumper catches that we used to find, which can only be a good thing,” Wilson further told I-Witness News.