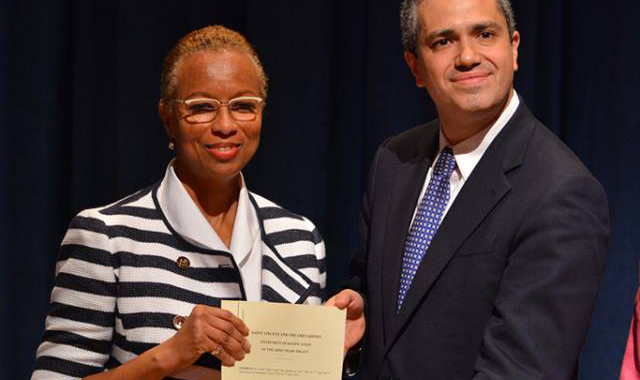 SVGs Ambassador to the United Nations, Rhonda King, left, signed on behalf of her country.

St. Vincent and the Grenadines (SVG) and Jamaica ratified the new Arms Trade Treaty in New York on Tuesday, playing an historic role in helping end the irresponsible, lethal trade in small arms and light weapons and ammunition that are devastating lives in the Caribbean and across the globe.

The global arms trade is estimated to exceed US$85 billion.

The delegations of SVG and Jamaica on Tuesday attended a special ratification ceremony at the United Nations’ Headquarters, in New York, to mark the event.

Folade Mutota, president of the Caribbean Coalition for Development and the Reduction of Armed Violence (CDRAV) and member of the Control Arms Coalition, the global civil society network that led the campaign for the Arms Trade Treaty for well over a decade, attended the ceremony in New York.

“It is really positive that two more CARICOM member states have ratified the Arms Trade Treaty. St Vincent and the Grenadines hosted two of the four regional preparatory workshops at which CARICOM’s common negotiating position was agreed,” Mutota said.

“Jamaica was very instrumental during the negotiations when the region successfully pushed for the inclusion of small arms and ammunition in the treaty.

Caribbean civil society calls on our governments to do all that is necessary to implement this treaty,” she further stated.

Mutota said the road has been paved for governments to take effective measures to reduce significantly the proliferation of illegal arms and ammunition and the devastation that follows.

Since the Arms Trade Treaty opened for signature one year ago, 118 states have signed it, and so far 40 states including SVG and Jamaica have ratified this pioneering international agreement.

In order for the treaty to enter into force and become legally-binding international law, only 10 more states are required to ratify.

“CARICOM should be among those ten states. We encourage CARICOM Member States that have not yet done so to ratify this treaty now,” Mutota said.

By ratifying the ATT on Tuesday, SVG and Jamaica join other CARICOM member states, Antigua and Barbuda, Grenada, Guyana, and Trinidad and Tobago that have championed the increasing global momentum gathering in support of the ATT. Other countries depositing their instruments of ratification at the event yesterday were Australia, Austria, Belgium, Burkino Faso, Luxembourg, and Samoa.

“I can’t over emphasise the need for strong national implementation from the start. The collective wisdom which guided the CARICOM strategy for the negotiations must be retained so that together we can really make a difference to the millions of people living in fear of armed violence every day,” Mutota said.