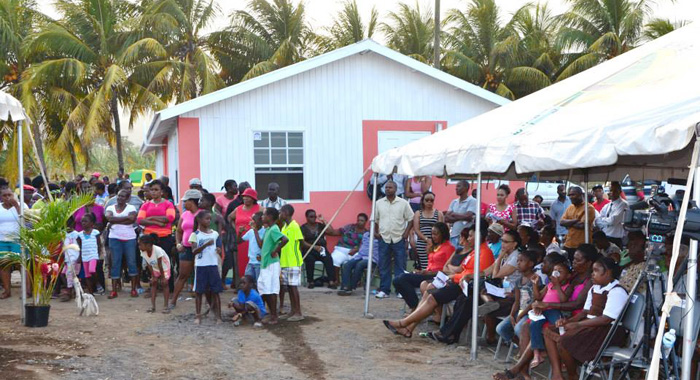 Persons being relocated as a result of the December 2014 floods and landslides began receiving their new houses on Friday.

The government handed over keys to seven houses in Langley Park during a ceremony in which Prime Minister Ralph Gonsalves noted that his government is the first to give houses to victims of natural disasters.

“This project as you see it here is costing the government $650,000 and this is being given to the people who suffered in the Christmas Eve storm,” Gonsalves said.

“And they don’t have to pay one single cent to anybody for those house there. If you want to see a government which takes care of people, it is the Unity Labour Party government,” he said.

Gonsalves, who is also Minister of Finance, said that the land has a market value of EC$5 per square foot.

Each house has two bedrooms, a living and dining room, a kitchen, and a bathroom and toilet.

Each house has about 800 square feet of floor space, and the average cost of each house, which has concrete and plywood walls, is $68,000, in addition to the cost of the land.

Gonsalves said that water is connected to all of the houses, and there was only one to which electricity had not been connected as yet.

He said that 90 houses for victims of the December weather system are at various stages of completion.

Gonsalves said that since coming to office in March 2001, his government has built over 1,000 houses, including under the Low Income Housing programme and for disaster victims.

A low-level through system on Christmas Eve produced torrential rains that triggered floods and landslides across St. Vincent.

Nine persons have been confirmed dead, while a further three are missing and presumed dead.

Loss and damage as a result of the extreme weather has been estimated at EC$330 million or 17 per cent of gross domestic product.