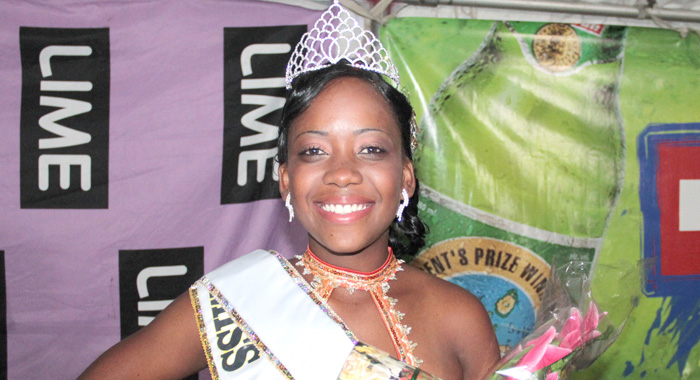 Chateaubelair representative, 16-year-old Oneisha Lavia did not attempt to hide her surprise when she was announced Miss North Leeward 2014 around 5 a.m. on Saturday.

“Honestly, I was [surprised], because I didn’t expect it was going to be me,” she told reporters after her crowning at the Petit Bordel Secondary School (PBSS).

“When they called out all the categories that all the girl got and I saw that only one sash I had, I was like ‘What?’ And then when I heard it was contestant number six, I was like ‘Okay, this is really mine?’” said Lavia, who did not win any of the categories of the show.

“I feel happy. … I didn’t know that I was going to win the show but I put my best foot forward and I did my best,” said the lass, who placed second runner-up in the Miss PBSS 2013 pageant.

All of the contestants had difficulties responding in the interview segment, including the winner of that category, Second Runner-up Shiwani Massiah, Miss Spring Village.

Some of the contestants hardly got past an introductory clause in their response.

“Because of the crowd, we got a bit nervous and that caused us to buss,” Lavia told reporters of the interviews.

Lavia will go on to represent her constituency at the Miss Rural SVG pageant in Canouan in July, but told reporters she is not yet sure how she will prepare for that pageant.

First Runner-up went to Miss Petit Bordel Osheca Edwards, who also won the Swimwear and Eveningwear categories of the competition.

Miss Fitz Hughes Moressa Small won the Talent segment of the show, with a hilarious rendition to dancehall and soca beats a song about the use of mobile devices to spread “commess” (gossip).

Saturday’s show, which went straight into j’ouvert, was affected by an incessant drizzle at a time when the country is experiencing a drought that is yet to relent, a full week into the rainy season.

There were a few squabbled among patrons at the pageant, which formed part of North Leeward carnival 2014, which was adjudged by the Carnival Development Corporation as the most improved rural carnival 2013.

The bar operating inside the venue did not adhere to the no glass bottle policy and served some drinks in glass bottles.