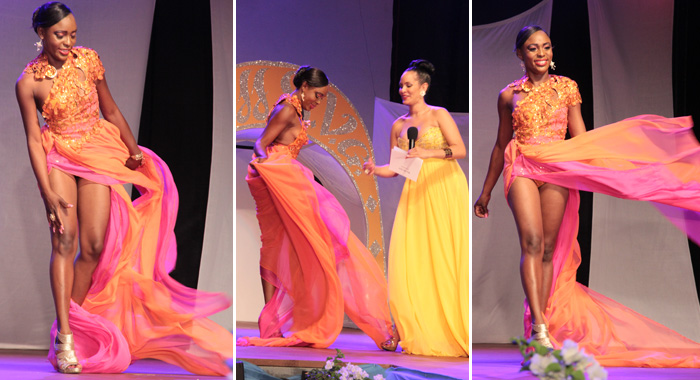 Vanika Hope says she was well covered and never exposed and that her performance was in no way affected by the development. (IWN photos)

The wind caused patrons to see a lot more than Vanika Hope intended during the Evening Gown segment of the Miss SVG pageant on May 31.

“The spilt was high and then the wind blew it up. I couldn’t do anything about it. It wasn’t my fault,” she told I-Witness News of the event.

As the contestant, who was sponsored by Super Six, was on stage, a strong breeze began to blow, causing one part of the dress, which had spits running almost up to her waist, to become wrapped around her foot.

The contestant, entangled by her dress, struggled to walk on the stage.

During her interview with LaFerne Fraser (Miss SVG 2002), the former beauty queen assisted the contestants in freeing her leg of the dress.

Hope said that the incident did not affect her performance in the show.

“I was expecting that, as a matter of fact. … I still moved on. It wasn’t a problem for me. I was happy throughout the whole night,” she told I-Witness News.

At some points, an orange undergarment was visible and Hope’s butt cheeks were exposed.

“Everybody saw my legs, but I was well covered. I had on my underwear and an under piece. The under piece, if anyone saw it, it was part of the dress,” she said.

“I enjoyed the show, I did my best. I said I was gonna put my best foot forward, I am going to do my best and the judges make the decision.   Whether they are right or they are wrong, I don’t have anything to do about it, because, as I always say it, what is for a man, at the end of the day, he always get it,” said Hope, who added that she had heard “rumours” that the judges cheated.

“Not because I didn’t win or didn’t place, it is not going to be a problem for me. I am still going to move on with my life, I am still Vanika Hope,” said Hope, was voted Miss Congeniality by the other contestants, and hopes to study social work.