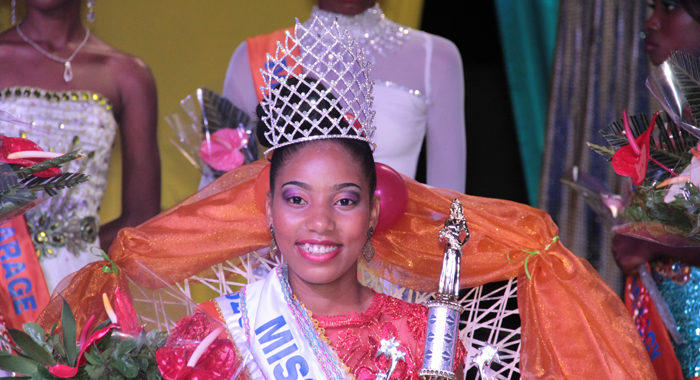 (Scroll for link to photos of show)

Marriaqua seems on course to continue to produce a steady stream of contestants for the Miss SVG pageant.

Solange Fernandez, who was crowned Miss P’Tani 2014 on Friday, says she hopes to enter Miss SVG 2016.

A past competitor in the pageant will apply to compete in the 2015 show, and Shakell Bobb, who placed Second Runner-up in the Miss SVG 2014 pageant is Miss P’Tani 2011.

Selis Blair, who like Bobb is a resident of Richland Park, also competed in Miss SVG 2014.

Fernandez won three of the four judged categories and defeated six other contenders for the Miss P’Tani crown, in a show that continues to be an example of what a rural beauty pageant could be.

She won in the Swimwear, Eveningwear, and Interview segments, while First Runner-up Nikiesha Saunders of Sion Hill won the Talent category.

“I am overwhelmed. I did my best and my hard work paid off,” Fernandez told I-Witness News soon after her crowning.”

She praised the support of her Biabou villagers and the population of Mesopotamia, adding that she had to go through a lot of training for the pageant.

“I had to learn to walk properly and speak well. There was competition in the show but I went out there and did what I had to do.”

Fernandez said she saw Saunders as her biggest competitor.

“My weakness was speech; I thought that she possess such qualities. I did not expect to get Best Interview.”

But Fernandez, who appeared as contestant number 2, was especially fluent during the interview segment, causes some persons to ask if the contestants were given their questions before hand.

She said that contestants were given general questions. But, in addition to a question based on their biographies, they had to randomly select the second questions during the interview segment.

During the interview, Fernandez whose biography says her goal is to work, was asked what are some of the weaknesses she sees in the industry and suggestion for improvement.

Her second questions related to the government debating “legalizing marijuana for medical purposes”. She was asked if she thinks the government should legalize marijuana, and to give reasons for her answer.

“The legalization of marijuana has been an ongoing debate here in St. Vincent and the Grenadines. I think that marijuana should be legalized for medicinal purposes.  In other countries where marijuana has been legalized, it has been proven to be helpful to persons suffering from illnesses such as arthritis, cancer and HIV. And I think it will be equally as helpful to persons suffering from such diseases here in St. Vincent and the Grenadines. However, if legalized, it should be under strict control and prescribed by the doctor.”

The show, which was held at the La Croix Boxing Plant, began at 9 p.m. and ended around 2 a.m. The pageant was followed by J’ouvert on the streets of Marriaqua.