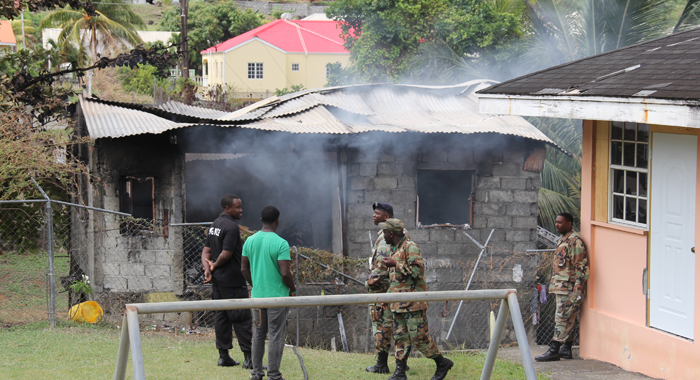 The contents of the house was destroyed, and the structure compromised. (IWN photo)

A Campden Park family is once again homeless after a fire Monday morning destroyed the roof, windows, doors and contents of their two-storey concrete home.

Dolita Diamond had spent many years without a home, including years living in the community centre in Campden Park.

“Me live all about with me children,” she told reporters on Monday outside the burnt out shell of her home.

The house, which displayed signs of poor workmanship, stands precariously close to the nearby river.

The family said the lower floor had been flooded out many times, including last Christmas Eve during the through system that left significant damage and nine confirmed death.

Now, Dolita, who is hypertensive and unemployed, and sells recyclable plastic bottles to earn a living, is back to where she was almost 20 years ago: homeless.

“Right now, I am so frustrated, I can’t even find words to say,” her husband, Stavius Diamond, told reporters.

He had earlier made very little attempt to mask his frustration as he speculated about how the extend of the damage could have been minimised.

Stavius, a construction worker, was on his way to work in Sion Hill when he received the call that the house was on fire.

His wife was at the roadside conversing with a friend who had come to visit.

She said the friend looked around and noticed that the house was on fire.

Stavius said that the electricity, which had been disconnected for several months, was reconnected early last week.

He, however, said that on Saturday, his wife pointed out that the electricity meter was not spinning and she had planned to go into Kingstown to report the issue to VINLEC today (Monday).

“I just have to struggle and do everything on my own. It is very hard on me; very hard. I just have to cope with it. I don’t know if I will get help from people in this country,” Stavius said.

His wife said that while the National Emergency management Organisation (NEMO) visited after the Christmas flood, they only gave disposable diapers and baby foods for her grandson, who is now seven months old.

But Stavius said that while he is “poor”, the house contained a lot of valuable things, including a

“Everything burn flat; everything,” he said, adding that they also lost the computer and printer that he used to burn movies to DVD to sell.

Stavius said he used to sell movies in Kingstown, but quit doing that because his wife has high blood pressure and could not cope with the hassle.

He then started selling the movies around the South Leeward village.

“I lose everything — my couch set, everything. It is so sad to see and sad to hear. It is life. I just have to try live with it,” he said, adding that  he might have to seek lodging with his father, calypsonian “I Come”, or other relatives.

“But I don’t mind for me, but my wife, she would need somewhere to stay. She is a lady, she will need somewhere proper to rest her head and feel comfortable. … She is homeless; the kids are homeless,” said Stavius, who pointed out that while he is not the children’s biological father, he raised them as if they are his own.

“Not even a boxer I saved. I have to start all over from ABC to Z. The only hope I have is the Almighty. I am feeling so distressed right now, I can’t help the feeling,” he said.

Dolita was also unsure when asked where she would spend the night.

“Me nah know. Me go find somewhere. God is good,” she said.

Persons wishing to help the Diamonds can contact them at telephone 784-495-6820.