Fire truck gets into accident while responding to fire 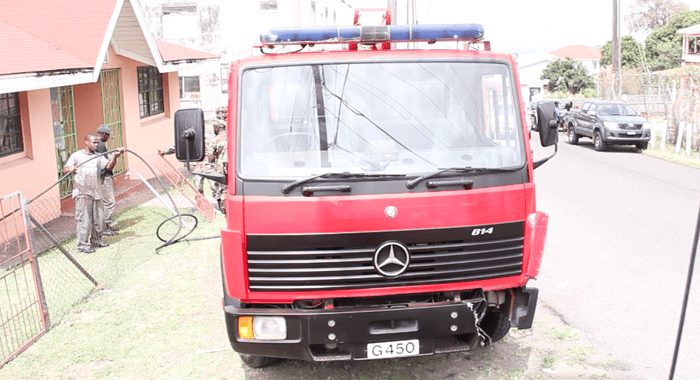 The fire truck was still able toattend to the . firfire e

The fire truck responding to the fire which destroyed the roof, windows, and contents of a house in Campden Park on Monday got into an accident on the way to the scene of the fire.

Sergeant John Henry of the Fire Department, who was driving the fire truck, said he was overtaking a line of vehicles near the bridge in Campden Park when the accident occurred, sometime after 9 a.m.

He said that the siren and emergency lights were on, but the driver of the car involved in the accident claimed not to have heard the emergency service vehicle approaching.

Henry said that while he applied the brake, the weight of the truck caused it to slide on to the car.

Henry said it took about 10 minutes to clear the road and allow the flow of traffic to resume.

“It was an accident,” he said.

Stavius and Dolita Diamond, a married couple, and the other five members of their household, composed of Dolita’s children and grandchildren,  lost all their belongings in the fire.

Dolita, whose only source of income is collecting and selling recyclable plastic bottles, said it took a very long time for the fire tender to arrive.

She estimated an hour.

Dolita said she and her children had spent years living in the community centre, before erecting the house along the river side.