Guns and weed not new to Lowmans Hill 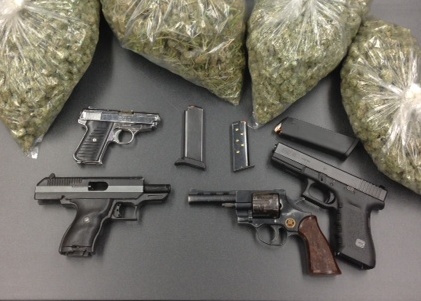 Though historically a farming community, Lowmans Hill is not new to guns and weed. (Internet photo)

Lowmans Hill is not new to guns and weed. The violence was, however, rare in my time growing up as a boy. It is historically a farming community or a community where villagers, regardless of their full time jobs, found time to rear livestock, plant potatoes, eddoes and other root crops and vegetables. Some of the villagers, I guess, took that skill for farming into the St. Andrews mountain to plant a little weed. Yet, they interfered with no one. If I were up early enough, I would see them pass my gates with dogs, supplies and even a shotgun.

Three injured in ‘shoot out’ in Lowmans

But, life in Lowmans Hill was not all farming — ganja and otherwise – we had a park that we called over yonder, or a park that was located “Over Yonder”. It was really nothing fancy. It was a cricket pitch in the middle of sloping lands, surrounded by mango and coconut trees. The whole community went Over Yonder on Sundays. It was always top Lowmans versus bottom Lowmans or we battled the occasional outsiders or a team from Campden Park, Questelles or neighboring village. My father was a star batsman, Minty’s father was a fancy stroke player and his older brother, Solomon, was a ferocious bowler while his other two brothers, Son and Julian, were both good with the bat and ball. The women of the village provided the food and drinks. The village children were the majority of the spectators. I remember being perched on a branch of one of surrounding mango trees with other kids, or even on a stone — there were a few huge boulders over yonder — enjoying a lovely game of cricket.

When it wasn’t cricket or farming the lands, the village men went hunting at nights. They had their dogs, their flashlights and their “grains”. A grain is a sharpened piece of steel attached to the end of a long bamboo — perhaps 10-20 feet — that was used to spear manicous. The lights were shone in the trees. The grain pierced the manicou and the dog retrieved. I went a few times with my father, Minty’s old man, a cousin called “piece ah man” and a few others. It was a treat.

Hunting and sports weren’t the only extracurricular activities we enjoyed, however. We went fishing too. That was my favorite pastime. I loved it. I went with the bigger boys. I had a good friend called “Fowl” who is now deceased — he died many years ago — who used to check me to go with him. Now I think of it, not only was I inquisitive and adventurous, but it was likely encouraged by the fact that everyone had to pass my gate to go to the river, mountain or over yonder. Fowl was not the only one that took me fishing, I went with the Fairbairn brothers too or my own brothers. In any event it was a bunch of us who would go to the river in search of crayfish, river lobsters and crabs. On our return we would cook or play some game of dominoes.

I say all this to emphasise the importance of sports, extra curricula activities and community. Lowmans Hill doesn’t have an Over Yonder anymore — not the Over Yonder we knew as children that filled our weekends and evenings with cricket and soccer or a game of hide and seek. Over Yonder went and so did everything else. We need parks, playing fields, sporting complexes and so forth throughout SVG. We need a national mentorship/big brother/big sister programme. It wasn’t always so. I bet that there were many other villages like Lowman’s Hill. Certainly not as special, but similar in some ways. We can retrieve some of what we lost. We can and we must.

One reply on “Guns and weed not new to Lowmans Hill”