Man gives girlfriend all his money and steals saltfish 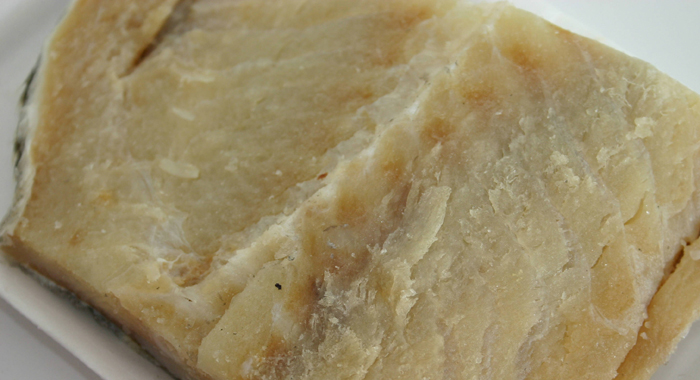 Well, the scenario might be somewhat hilarious and can perhaps make a spot on a Comedy Hour show but the crime was serious enough that the defendant now has a suspended sentence hanging over his head.

When he appeared before the Kingstown Magistrate Court this week, the law offender, Mark Lawrence of Questelles pleaded guilty to stealing seven packs of codfish (saltfish) valued EC$67 and two blocks of cheese valued EC$5 from G&T Enterprises Supermarket at Sion Hill.

He was sentenced to imprisonment of six months but the sentence was suspended for six months. If he is found guilty of an offence during the next six months, he will he will have to serve the six months sentence which has been suspended, along with any other penalty which may be imposed on him as a consequence of the newer offence.

Police said that on June 14, about 11 a.m. former national and Windward Islands cricketer Golan Greaves, who owns the supermarket, saw Lawrence enter the business place, look around and left.

About five minutes later, Lawrence went back into the supermarket with a black plastic bag crumpled in his hand. Greaves kept him under observation and saw him go to the back where a cooler was located. He took the codfish and cheese and placed them in the plastic bag and walked toward the entrance, going past the cashier.

He was intercepted by Greaves who took the bag and detained him. The police were summoned and Lawrence was arrested and charged.

“Officer, me geh me girlfriend all de money,” Lawrence was said to have told the police when he was cautioned.

Lawrence told magistrate Rechanne Browne he was drunk that day. He also said that a worker told him both of them should “eat ah food today” (make some money).

“Yuh weren’t so much under the influence. Yuh know yuh go fuh sal’fish,” said magistrate Browne-Matthias using colloquial language to effectively carry her comment along with the tone and spirit.

As the prosecution exhibited the black bag with the saltfish, a police officer said jovially “like they forget to soak it”.

The lawman’s comment was in an apparent reference to a line of a popular soca song that says when cooking saltfish, “soak it, soak it; soak it good”.

Having made comments on the amount of persons appearing in court during the carnival activities, magistrate Browne-Matthias added, “Carnival ain’t finish yet; but like yuh like sal’fish.”