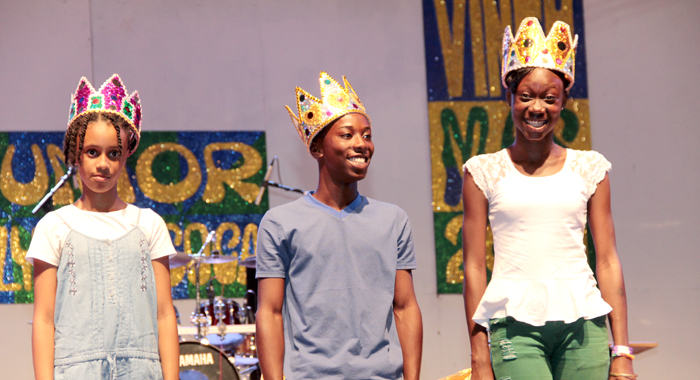 Three bards won their first junior calypso and soca crowns when the show was held at Victoria Park on Tuesday.

A new winner was necessary in the Primary School category of the calypso competition as last year’s monarch, Kristiana “Singing Kristy” Christopher, is now a student of Thomas Saunders Secondary School.

Tia “Singing Tia” Wyllie of New Prospect Primary School, who placed second last year, the first time she entered the competition, won the primary school crown this year with her song “Save the Environment”.

“I am feeling good because I know I was supposed to win before,” she told reporters after her crowning.

Cha-Chanie “Lady Cha-Chanie” of New Prospect Primary School was third, with her song, “Let’s Work Together to Build this Country”.

But while Singing Tia saw her fortunes increase, in the secondary school category of the competition, Singing Kristy, who sang “Change”, placed third place.

There was a problem with the sound when Singing Kristy’s began singing, causing the producers to ask her to start again.

The 12-year-old artiste, who completed a hat trick of wins in the primary school category last year, seemed ruffled by the development.

One of Singing Kristy’s aunts, who said she had travelled from New York to see the artiste perform, expressed displeasure loudly after the glitch and accused producers of wanting to cause the artiste to lose.

Nineteen-year-old Roshard “Mighty Kel” Tittle, who was entering the competition for the first and last time, won the secondary school category.

He told reporters during a post-show interview that he is talented in singing, dancing, and modeling.

Mighty Kel’s music teacher, Hank Williams, convinced him to enter the competition after he performed at a concert at the school, the artiste said.

Mighty Kel said he plans to join a calypso tent and enter the national competition.

Grantliea “Skippa” Caine of Intermediate High School did not perform as scheduled.

(See also: Bard drops out of Junior Calypso competition one day before show)