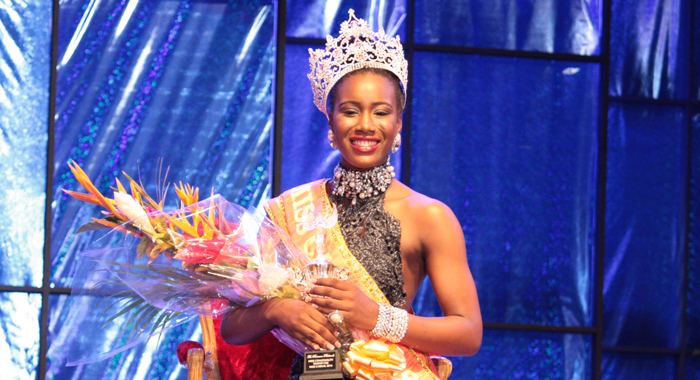 In addition to nine other contestants, Miss Dominica Francine Baron also battled a sore throat, but emerged winner of the Miss Carival pageant Friday night, taking the crown back to the Nature Isle for a second consecutive year.

“I had a sore throat and I was really nervous cause I knew I had to sing. But when I sang my song, I said, ‘Okay, you can do everything else, because you did the most difficult thing’,” she told reporters during a post-show interview.

The 20-year-old beauty said she developed the flu after getting wet during a motorcade that was part of events leading up to the regional pageant.

Baron, who said in her biography that after battling with constant insecurities as a teenager she now lives by the motto “the human mind can be a dangerous place”, told reporters she can now use her victory to substantiate what she has been telling her students: “…don’t let one result bring you down”.

Miss Carival was Baron’s second regional pageant since being crowned Miss Dominica on March 1. She came home empty-handed from the PJD2 Caribbean Queen Pageant in St. Maarten in April.

“… after my first regional pageant, I got really, really depressed, and really crushed and it took a lot out of me to get back on my motivation path and to tell myself ‘You did it once, you can do it again; don’t let one result bring you down.’ And this is proof, and this is what I try to tell my students everyday. So I can go back to work and tell them, ‘You see!’,” she said.

Baron said that after her failure to win anything in St. Maarten she was “so crushed and so depressed.

“And then people would say, ‘You did really well; don’t worry’, but you have to find that peace within yourself before you can move on to any other pageant and that what we did. And I worked so hard. From work to practice; from practice to gym; oh my gosh, it was really difficult. And I thank God for what he has done for me, and he continues to proof that when you have faith in him, he will carry you through,” she told reporters.

“I can finally go back to Dominica without that load on my back,” said Baron, whose country now ties with St. Vincent as the Grenadines as having won the crown six times each since the pageant began in 1985.

The Sugar City’s delegate, Kaeve Armstrong, was a clear favourite among many patrons, including those directly in front of the stage, where sections of the media were stations.

But the panel of judges, comprising persons from across the region, decided that the Dominican delegate had outperformed all the other contestants.

Those patron who favoured Miss St. Kitts and Nevis seems to have based their disagreement with the judges largely on the fact that Baron, who was Miss Congeniality, won only one of the judged segments of the show — Best Swimwear — while Armstrong won the Talent and Interview segments.

Armstrong left many patrons amazed with her powerful vocals, as she expressed in song the various emotions of a heart-broken, “up and coming” singer whose husband of 15 years cheated on her.

One moment, she was singing a very sombre and emotive, rendition of  “I Who Have Nothing”, illustrative of the emotional pain and suffering experienced by a persons betrayed.

The next moment, Armstrong was into a dance hall rendition, reminiscent of the way in which a Jamaican artiste might express in song, the same emotional pain of being betrayed.

And, as quickly as the dance hall interlude came, Armstrong was back to her sombre rendition of “I Who Have Nothing”.

By the time she was finished, it became very clear, that although three of the 10 contestants remained to perform after Armstrong that they would have had to perform above and beyond to wrestle the talent segment from her.

Armstrong also won the Interview segment of the show with her responses to questions about music revealing the hidden treasure beneath the soul, and the tourism industry in the Caribbean.

Asked how she felt when it was announced that she was the winner, Baron told reporters that she remembered what pageant organisers had told contestants ahead of the show.

“They told us something earlier — that the points add up and that is how you find the winner. It is not about who did the best in certain segments. It is about who gets the most points.

“So when I heard that, I said, ‘Okay, consistency is the game; you just have to be average, or you have to be really good in almost all to succeed. And I think some people did better in certain rounds, but as long as you are consistent, it usually pays off; it always pays off, in fact,” she said.

And with three more pageants coming up, Baron said it is “back to training, back to dieting, back to gym.

“So it never really stops until you give up your home crown. So it’s back to work,” she said.

It is the second time that Dominica is winning the Miss Carival twice in a row — which it also did in 2006 and 2007. SVG is the only other country to win twice in a row, but have only done so once.

And, if Dominica wins again in 2015, it will register the pageant’s first hat trick of win, which would come on the 30th staging of the regional show.

Nevertheless, Baron said she does not want her victory to put pressure on her country’s delegate next year.

“I hope that my winning anything doesn’t put any pressure on anybody, because I know what it is like and I know how it feels. So whoever is next, I am going to work with them, I am going to make it a point of duty to tell them you don’t have to be a winner all the time. As long as you but your best foot, you are a winner in my eyes and in the Dominican public,” she said.

Vincy Mas 2014 continues today – Saturday – with the staging of the Soca (Ragga and Power) Monarch Show at Victoria Park.