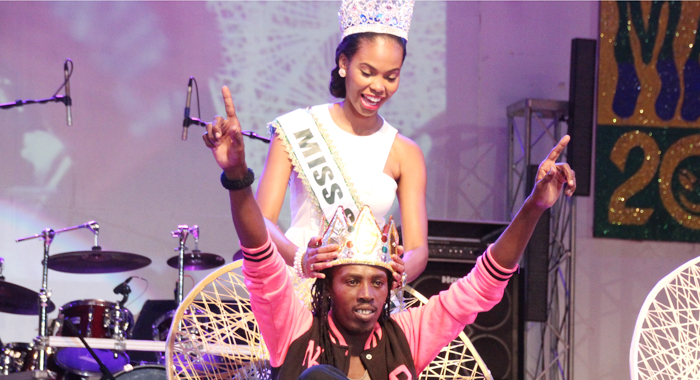 Telecommunications provider LIME is celebrating the accomplishments of its ambassadors following what it described as “a very triumphant carnival season”.

The company said LIME-sponsored individuals have had successes during the season and the LIME Monday t-shirt band “was arguably one of the biggest on the road for Monday jump up”.

The success started with Shadeisha George, Miss LIME, who won the Miss SVG pageant on May 31.

George went on to represent St. Vincent and the Grenadines at the Miss Carival pageant on July 4.

LIME said while George did not place in the top three, “she gave a credible account of herself and did St Vincent and the Grenadines very proud”.

The following night, long-time LIME Vincy Soca Dan Delroy “Fireman” Hooper created history when we walked out of the Victoria Park with the Raga and Power Soca titles, defeating 22 fellow artistes in the process.

After Fireman’s “Rum Meeting” in the Ragga competition, he led the entire audience at the Victoria Park in some “Unruly” behaviour in order to take the Soca Monarch title.

Fireman’s songs “Unruly” and “Rum Meeting” went on to take the first and second place in the Road March competition.

LIME said Fireman will be treated to an all-expense paid trip for two to St. Lucia Carnival 2014 and Spice Mas in Grenada 2014.

The company also noted that LIME Soca Dan Rondy “Luta” McIntosh — “De Crowd Motivator” — celebrated 20 years in the industry. It further said that the other LIME ambassadors (DJ Q, Chemical X and Pitbull, Hypa 4000, Dr. Fugi) kept the crowds “turned up” on the LIME Monday band trucks and at the various LIME sponsored shows throughout the season.

LIME also continued to facilitate the CDC live streaming of shows to persons outside of SVG.

Persons were also able to vote for their favourite artistes and contestants and songs on the LIME Viewers Choice Awards Facebook page.

“LIME would like to take this opportunity to congratulate all the winners and participants in each and every one of this year’s carnival activities, and reaffirm its support for the Carnival Development Corporation, and carnival and culture in St. Vincent and the Grenadines, as it continues to make Vincy Mas the Hottest Carnival in the Caribbean,” the company said.