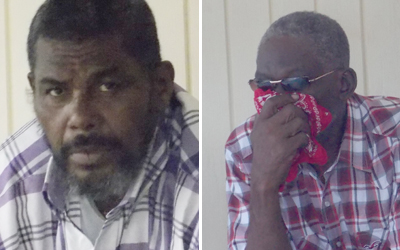 Head of the Criminal Investigation Department Assistant Superintendent of Police Sydney James says police were this week unable to charge two Trinidadian suspects with pickpocket related offences because their alleged victims were mainly visitors and had already left St. Vincent.

Detectives had taken the two Trinidadian men into custody during the carnival activities as they investigated reports of pickpocketing in Kingstown.

The two, 60-year-old Wilfred Roach and 58-year old Peter Balgar, were held days after they arrived for the country’s biggest cultural festival which ended on Tuesday.

I-Witness News understands that the men had thousands of dollars in cash in various currencies, which the police took into their possession as they investigated the reports.

Police said that on July 3 they executed a search warrant at the apartment where Roach and Balgar were staying at a guesthouse in Kingstown Park.

Both were arrested and charged for marijuana possession.

The Trinidadians were represented by Israel Bruce, who made an application to the court for an order instructing the police to release whatever property they had taken from the visitors.

He said that their fines could be paid from the monies held by the police and that would ensure they were able to return to their country speedily.

The order was granted.