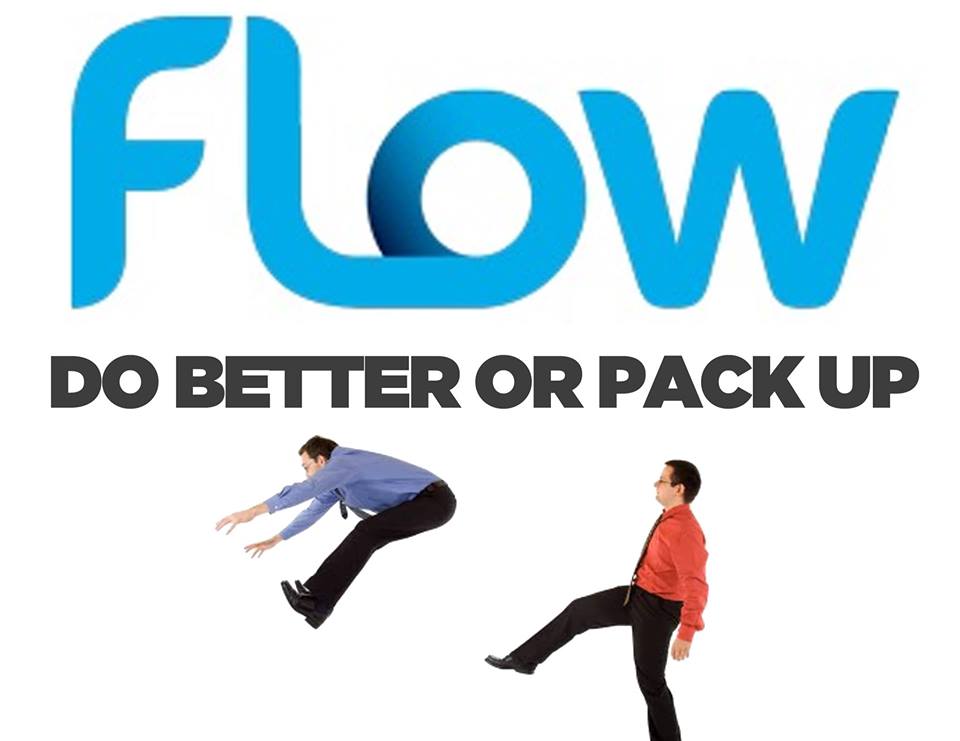 Some customers have used this meme to express their feelings about FLOW.

Vincentians on Friday began to return their cable television boxes to service provider FLOW after the company removed some of the more popular channels from its basic package.

Customers have also taken to the social networking website Facebook to express their frustration with the company and to seek each other’s assistance in trying to make sense of the new configuration.

Some persons have also change their profile photograph to a meme of one man sending the other flying through the air with a kick in the butt.

“Do better or pack up”, the text under the FLOW logo in the meme reads.

“SOS… We need another cable provider in St. Vincent. Flow is taking advantage [of] us,” one person wrote on Facebook on Saturday.

“FLOW! Unless there is some improvement to the current channel offerings…there will be a steady flow of customers migrating to an alternative. Get your act together now!” another person wrote.

That same person went on to question whether the National Telecommunication Regulatory Commission (NTRC) has “a [proactive] role here or must we suffer through a long drawn complaints process?

Yet another Facebook user on Saturday listed FLOW, a sports organization, and a fast food outlet as the “worst THING IN SVG RIGHT NOW”

“Flow, this have to be a joke … We have Pakistanis living here?” that same persons said, in an apparent reference to one of the channels being offered.

In one of the most detailed pieces on Facebook about the situation, one user of the social networking website said FLOW’s removal of channels such as “AXN, Sony, USA, WPIX and several other channels was such a poor decision.

“Flow did your marketing team conduct any survey to ascertain from your customers the channels they liked?” the writer further ask.

The writer refers to a June 11, 2014 letter from Columbus Communication, owners of FLOW, in which it said changes to its service are designed to enhance customers experience as FLOW brings what it described as the latest innovations in digital cable and broadband Internet and telephony services.

“I am very disappointed like thousands of customers with the new channel line-up you offered so far. Why should Vincentians sit down and watch all these regional channels and international channels that make no logical sense,” the writer said.

“SVG is paying more for the same or in several cases, for even slower internet speed,” the writer further said.

In St. Vincent and the Grenadines, however, the same package costs EC$90.85.

“Please for the love of your valued customers in SVG consider the following actions:

“We your valued customers are waiting to see if your company truly has your customers’ interest at heart or that of making a profit only. You claim that you are going to be better than Karib Cable but thus far you have much to accomplish,” said the writer, who signed the letter “Your Valued Customer”.

Columbus International Inc. announced on March 4, 2013 that it had signed a definitive agreement to acquire Kelcom International Limited and certain of its related companies.

Kelcom, a privately held company, operated under the name Karib Cable and was the leading cable system operator in St. Lucia, St. Vincent and the Grenadines and Antigua.

Ahead of the acquisition, customers in SVG has complained about the type of packages they were being offered relative to the cost, compared to Karib Cable customers in other Caribbean countries.

In October 2012 Prime Minister Ralph Gonsalves, who was also Minister of Telecommunication, said he considered it “gross disrespect” that Karib Cable changed its channel line up without an explanation to its Vincentian customers.

Gonsalves said then that if Karib Cable did not improve their service to Vincentians, investors will be actively sought, to compete against them in SVG.

“I join with the overwhelming majority of subscribers to Karib Cable to express my ministry’s dissatisfaction and the government’s dissatisfaction … with the way in which Karib Cable has altered its offerings for which people have paid, without properly advising or informing them about any alteration,” Gonsalves said.