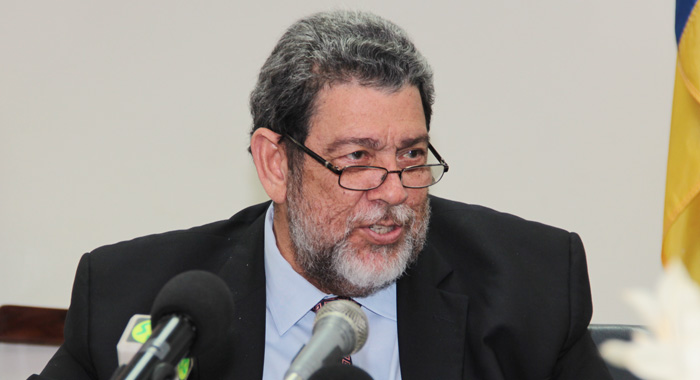 The Caribbean Community (CARICOM) is being warned against mixing the fight against HIV/AIDS and the gay rights agenda.

The warning comes from Prime Minister Ralph Gonsalves on the heels of the CARICOM Summit this month, at which there was a discussion about the Pan Caribbean Partnership Against HIV/AIDS’s (PANCAP) “Justice for All” programme.

The programme, which was launched on Dec. 1, 2013 seeks to help guide countries as they address AIDS-related stigma and discrimination, improve the legal environment and remove discriminatory laws related to HIV.

Gonsalves said that while HIV/AIDS is openly discussed in the region, there are a number of groups, including advocates for HIV/AIDS, which want to extend the boundaries to include gay right.

He said CARICOM leaders meeting in Antigua this month did not agree with a number of elements of a declaration tabled at the meeting.

He said the way declaration is drafted, it has to go back to the drawing board, adding that the central issue must be the fight against HIV/AIDS.

“We must not seek to transform the fight against HIV and AIDS into an agenda for gay rights,” Gonsalves said.

“I made the point that there is a legitimate discussion to be had, a mature discussion to be had in the Caribbean and anywhere else on gay rights, and I have said before that in my view, the churches, the NGOs, the press, there are a number of entities that are well-placed to fuel and have that mature conversation,” he further told a press conference.

“But we must not allow the fact that a lot of funding for PANCAP, which comes out of certain agencies in Europe and the United States, to be manipulated to advance a gay right agenda as distinct from fighting the issue of HIV and AIDS.”

Gonsalves, who has emerged as the leading voice across the region on reparations for native genocide and slavery and the decriminalisation of marijuana for medical purposes, said he will not lead the discussion on HIV and AIDS.

He noted that HIV/AIDS high-risk groups include heterosexual persons with multiple sex partners, gays, and drug abusers, adding that the region has almost beaten the “beast” of mother-to-child transmission.

He said the Caribbean region is best positioned to achieve by August 2015 the elimination of mother to child transmission of HIV.

“So, we mustn’t reach the stage now where we are saying, ‘Look, the only way we can make further inroads against HIV and AIDS is to decriminalise sexual activity among consenting males in private; that the way to do it is to go beyond that and to even embrace civil partnerships for males and females too’,” Gonsalves said.

“I don’t accept the thesis that to make the further advances for HIV and AIDS, that we need to do the decriminalisation of homosexual activity among men in private, though that is a conversation which mature people can reasonably engage in,” he said, adding that merging both agendas could undermine “the mature conversation in each of those cases”.

Gonsalves spoke of the on-going debate across the world and noted that U.S. President Barack Obama, who he said is respected across the Caribbean, has spoken in support of same-sex relationships.

The Prime Minister also said it is “entirely out of order” to want to use violence against a person because they may have a different sexual orientation or to threat them in a way as though they have no human rights.

He, however, noted that not because someone opposes homosexuality means that they are stigmatising someone with HIV/AIDS.

“But it doesn’t mean that if you hold a particular religious or moral belief against homosexual belief that the proponents of homosexuality must become intolerant of you and want to make you feel that what you are talking about is totally out of order,” Gonsalves said.