Hope they ‘rot in hell,’ mother of passenger in missing plane says of inquest organisers 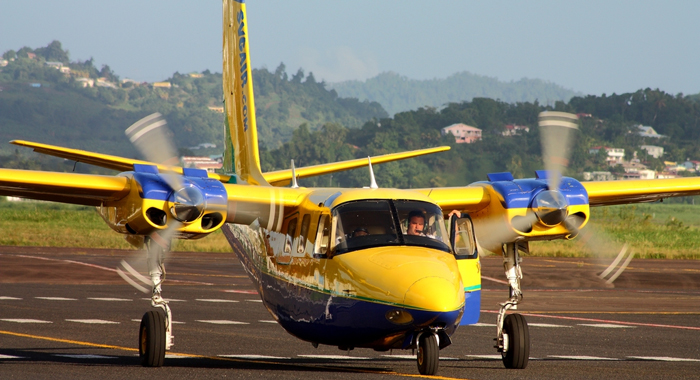 The SVG Air aircraft (similar to one pictured) and its passengers were never recovered. (Internet photo)

The mother of one of the two men in the SVG Air aircraft that disappeared in 2006 is not pleased with an inquest two weeks ago that returned a verdict of death by misadventure.

The plane, J8-VAX, a twin-engine Aero Commander 500S aircraft, was travelling from the Grenadine island of Canouan to St. Vincent on Nov. 19, 2006 when it disappeared.

The aircraft nor its occupants were ever received.

Director of Airports Corsel Robertson told the inquest that the occupants of the plane, the pilot, Dominic Gonsalves, and passenger, Rasheed Ibrahim, died.

She also said that proper procedure was not followed in the aftermath of the disappearance of the aircraft.

“I pray to God that all those involved, from the head to foot, they all rot in hell,” Nicha Branker, Ibrahim’s mother told I-Witness News this week.

She questioned the basis of the conclusion that the men died.

“I don’t know the basis on which they could rule that. … Maybe they want to put an end to whatever there is before Ralph Gonsalves goes out of office. I don’t know,” she said in reference to the Prime Minister and Minister of National Security and Civil Aviation.

“What constitutes a reasonably fair inquiry? Representation from all parties concerned? I don’t know; I will like to find out,” said Branker, who was not informed that the inquiry would be held or about the outcome.

“I saw it on the news, your news. I was not told anything by anybody,” she told I-Witness News on Sunday.

She said “death by misadventure” is “a very extraordinary phrase”.

“… Maybe everyone understands what that means, but I have no idea what it means,” she told I-Witness News.

Branker said that after the disappearance of the aircraft, her lawyers noted that a commander 500s aircraft is capable of staying afloat on water for a certain amount of time, and asked whether this had happened.
She said that the lawyers, who were Americans, also inquired about whether all the security features of the aircraft were functioning, and whether the maintenance record shows that J8-VAX was in fact compliant to air safety.

Branker also asked where the inquest received evidence from the captain of the LIAT aircraft with whom J8-VAX is last known to have communicated.

Branker said she had contacted the LIAT pilot via the Internet and was told not to contact him again and his lawyers were dealing with the case.

Branker further told I-Witness News that since her lawyers could not practice law in SVG, she turned over the material to two lawyers in SVG, neither of whom filed the relevant applications before the expiration of the statute of limitation.

She noted that November will be eight years since the disappearance of the aircraft.

“Does it make a difference to me that they had an inquiry and they have not called eight years after the incident? No,” she said and questioned the basis for the inquiry.

“On the basis of what? On the incident of an aircraft disappearing?” she said, noting that one does not know that the men died.

She said that a wheel chuck, which is placed in a levered compartment of the aircraft, along with some other items were recovered at sea.

“Who can verify that it belongs to J8-VAX? Nobody!” she told I-Witness News.

3 replies on “Hope they ‘rot in hell,’ mother of passenger in missing plane says of inquest organisers  ”