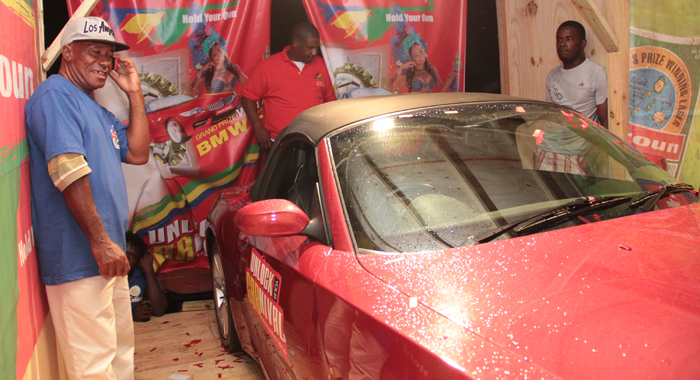 Lawrence Stephens telephones his family with the news that he won the BMW Z4. (IWN photo)

The 58-year-old man, however, will be bringing home a BMW Z4, a two-seater compact sports car.

Lady luck shone on Stephens more than it did on any of the other nine finalists in the Hairoun Beer “Unlock you CARnival” promotion in Kingstown.

(Scroll for link to more photo)

Sheldon Anderson of Questelles, who along with Stephens was the last of the finalists, won a large blue teddy bear.

“I am feeling proud, because I had a vehicle, I sold it and I need one, and because of Brewery I can have another one,” Stephens told reporters.

Stephens, an office attendant at the International Airport Development Co., however, said if the car dealer is willing to accept it back, he would prefer to sell the luxury sports car and “buy something smaller,” he said.

“I have a family, I don’t need a sports car,” said Stephen, who told reporters he was always confident that he would win.

Stephens recounted how he got to be in possession of the winning crown, which he collected at a social event at the IADC.

“One of the workers told me there was a promotion. ‘All the corks on the ground, why you don’t search,’ Stephens recounted.

“And I start searching, searching; and I got fed.

“And the second to the last one, I saw a door in it. I start asking around, nobody knew what the door is for. I took the door and put it into the vehicle, which was there, which I am accustomed driving. And not until about two weeks ago again when I had to turn over the vehicle to another worker, that seeing the cork there I took it out ant put it in my pocket.

“When I reached home, I met some guys on the block searching some corks. So I stood up, I said, ‘Why are you searching these corks?’ They said, ‘Boy, Hairoun promotion on, you know. If you only get a door, you are the winner.

“So, I pull out my door. I said, ‘Like this?’ The guys them like they get crazy,” Stephen said.

The father of three sons said he felt “proud” that he had won.

“My wife didn’t want the car. She wanted the set with the TV. But I always said I wanted the car,” said Stephens who had earlier revved the engine of his new car, which will be handed over to him officially at a later date.

The other finalists and their winnings were:

Alfred Howe of Chateaubelair: A tricycle

Carlos John of Ottley Hall: A truckload of Hairoun Beer

Cherise Durrant of Reeves Level: A trip for two to Crop Over

Errol Haywood of Akers: An ironing board

Alex Thomas of Glamorgan: A roomful of cash.

Persons who found a door under the crown of their Hairoun Beer had a chance to be in the finals.

Six persons had images of doors under their Hairoun beer crowns, and a further four were randomly selected from envelopes containing six “Hold Your Own” crowns with the name and telephone number of the consumer.

The “Unlock Your CAR-nival” promotion was launched on May 23 at the Heritage Square.