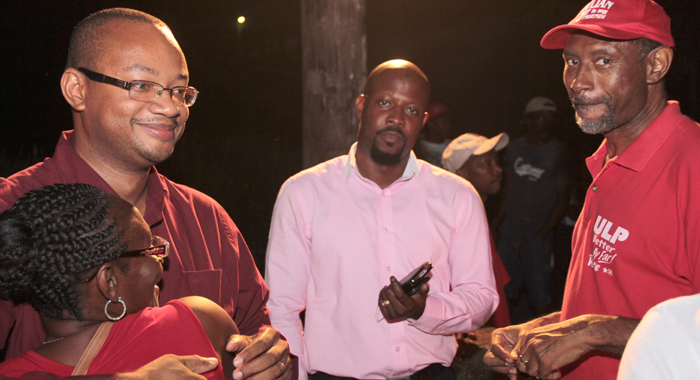 Grenville is hugged after the meeting. Carlos James, the ULP’s candidate for N. Leeward, and activist Grantley Williams are centre and right. (IWN photo)

Grenville Williams on Saturday nominated fellow contender Sen. Jomo Thomas as the Unity Labour Party’s (ULP) candidate for South Leeward in the next general elections, as the party’s constituency conference met in Vermont.

Some of Williams’ supporters did not approve of the move and walked out in protest.

(Scroll for link to photos)

After the meeting, Prime Minister Ralph Gonsalves, who is also political leader of the ULP, told reporters that former senator, David Browne, who lost to the opposition New Democratic Party’s Nigel “Nature” Stephenson in the 2010 general elections, seconded Williams’ nomination of Thomas as the candidate.

“There was a unanimous vote, not one dissenting voice, [from the] over 200 delegates; none said abstention,” Gonsalves said.

“It is a fantastic feeling. Grenville made a masterful speech. David, in his very own homespun way, was very emphatic in his support for Jomo, and Jomo recommitted himself to serving the nation and particularly the poor and working people, and the constituents of South Leeward,” Gonsalves further said.

Meanwhile, Thomas told reporters he is confident that he will wrestle the seat from the NDP.

“I have no doubts whatsoever that when the votes are counted on election night, the constituency of South Leeward would move from the NDP column back into the column of the Unity Labour Party,” he said.

But Thomas has emerged from the process after a very bruising campaign that has seen long-time party faithful and activists, including Questelles resident Edgar Cruickshank, remaining adamant that Williams should be the candidate.

Cruickshank did not attend Saturday’s meeting.

Asked how he intends to reach out to persons such as Cruickshank, Thomas said: “Well, you have to understand, in a hotly contested effort to emerge as the candidate, some people line up on one side, others line up with me.

“I am prepared to work with everybody. I have always said that irrespective of how the race went, I will work with the winner. It so happens that I emerged the winner, my team emerged the winner, and we are intending to unite all of the forces, all of the ULP people in South Leeward to ensure that we do the kind of work necessary to win this seat and to bring it back into the ULP.”

Thomas said he was elated that the process went in his favour.

“I am a very, very good candidate. I know that I will be able to carry the ULP banner well, I know I will be able to articulate the issues and push the questions that are necessary to get people, to convince people to vote for the Unity Labour Party.

“I think I have a history, a tradition of struggle, I have a history of uniting with people and fighting for people and I think that tradition would push itself forward and people, once they get to know me more, will come to the conclusion that I am a much better candidate than Nature Stephenson. They will be convinced that I am the candidate who can help to become a really good representative in South Leeward.

“So, I know that people might be disappointed that their person did not go forward, but I have no doubt at all that in the end we will unite the party.”

Thomas has emerged, as the candidate after a process that some members of the ULP have said contravenes the party’s constitution.

After neither Thomas nor Williams indicated that they would give way to the other, they agreed for the party to poll their names, along with that of David Browne.

Some inconsistency has emerged about the results of the poll, with initial reports saying that Browne was the most favoured, followed by Thomas, then Williams.

But Gonsalves told the meeting on Saturday that Thomas was the overall winner of the poll.

“Jomo will be screened now by the mechanism of the candidate selection committee for me to be able to report to the central executive for the confirmation of his candidacy.”

Gonsalves said the screening committee will raise a number of issues to Thomas about what is expected of a candidate of the ULP.

On Thursday, the ULP’s national council will approve Thomas and Carlos James, who was nominated by the North Leeward conference last week, Gonsalves said.

12 replies on “Supporters walk out as Williams nominates Thomas as S. Leeward candidate”