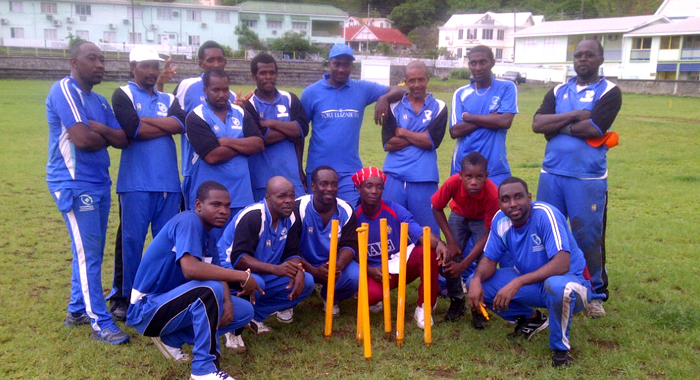 They achieve this feat after beating General Hardware Richmond Hill United by 11 runs in the finals at Grammar School Playing field on Sunday.

Batting first, Bank Of SVG All Stars were dismissed for 108 off 19.3 overs.

Newborne Joseph slammed 29. He was supported by Asquith Mapp, who got 27.

In reply, General Hardware Richmond Hill United were dismissed for 97 off 19.1 overs.

Rohan Ash top scored with 32. Dennis Grant bagged 4 for 25. He was supported by Newborne Joseph, who, putting in an all rounded performance, took 2 for 12, bowling for Bank of SVG All Stars.

In the third place play offs, Just for the Fun had a 42-run win over Buccament Bay.

Batting first, Just for the Fun reached 156 for 8 off their allotted 20 overs.

Okeiph Andrews slammed 51. He was supported by Dwayne Williams’ 38. Marcus McCoy took 3 for 18 and Rawle Stapleton 2 for 36, bowling for Buccament Bay.

Conrad Jack top scored with 34. Jevern Nero took 2 for 6 and Okeiph Andrews 2 for 26, bowling for Just for the Fun.

Okeiph Andrews of Just for the Fun got the most runs — 144, followed by Nyron Da Souza of Bank of SVG All Stars, who got 136

In the bowling department, Elroy Cumberbatch of General Hardware Richmond Hill got the most wickets — 22, followed by Jevorn Williams of C.K. Greaves — 17.