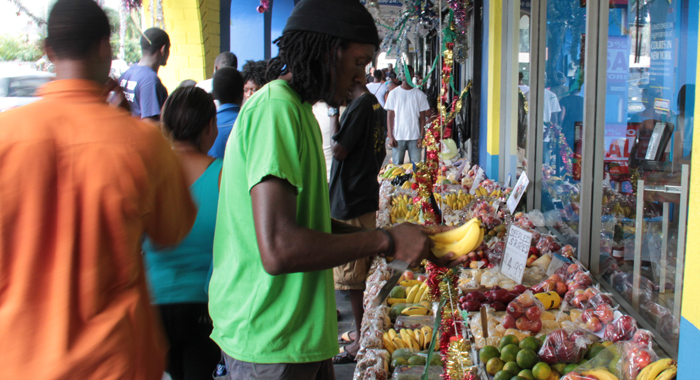 Leader of the Opposition Arnhim Eustace says while it is clear that the economies of the region are in trouble, the Ralph Gonsalves government has not outlined policies to ensure economic stability and growth.

“It is clear from what is being said that much work has to be done in these economies of ours to put our people back on sound footing,” Eustace said on his weekly radio programme on Monday.

“I have been listening over the last few weeks to the problems in Barbados in relation to their deficit. I have listened to some of the measures that they have imposed and I hear little about … what … the government of St. Vincent and the Grenadines is doing to take our economy out of the doldrums,” said Eustace, an economist.

“We are getting to a position where one of these days the bottom will drop out,” he said, adding that too many persons are unemployed and have to depend on Public Assistance.

“… too many of our people are sick, suffering and dying and much of it is related to stress in many cases and serious action needs to be taken by the government of St. Vincent to revive the St and the Grenadines economy,” he said.

Eustace said he saw a report where Moody’s implied that the deficit in Barbados is greater than in 2013. The report again questioned the value of the Barbados dollar against the U.S. dollar, Eustace said.

“All of these things are mulling around out there, but our government is silent on these issues, not coming forward with any meaningful proposals to put people back to work.

“I am not suggesting that it is an easy task, but it can be done and it must be done if our people are to come out of the situation that they now find themselves in.”

Eustace said thousands of Vincentians will need assistance this school year, at a time when funds are low for all institutions.

“That is the reality. … And the time must be that we see some positive policy changes in St. Vincent and the Grenadines, which could improve our situation, remove it from the pit that it is in now, to something more meaningful which will give our people a chance,” said Eustace, a former prime minister and minister of finance.

“But nothing meaningful is being done to address these issues,” Eustace said.