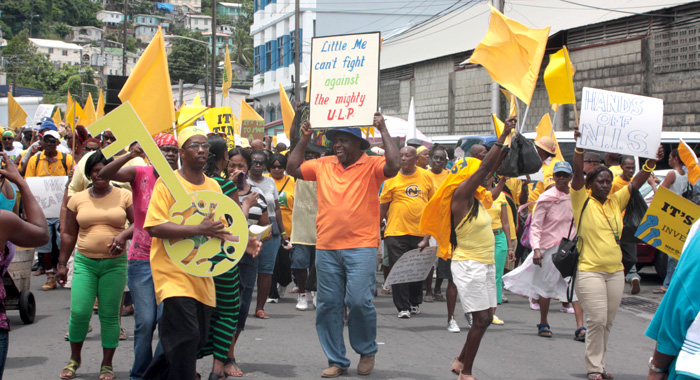 The NDP has invited citizens to highlight the issues affecting them. (IWN file photo)

The opposition New Democratic Party (NDP) says it will Thursday hold a “Ring De Bell” anti-corruption march and rally in Kingstown to highlight its displeasure with the Ralph Gonsalves government’s handling of the nation’s affairs and to force the Prime Minister to call early general elections.

“Come out and let your feelings be known. We have a corrupt country here; we have a poor economy and things must get better for people. And we are showing our disgust at the matter, and at the same time making proposals of how it should be dealt with,” NDP president and Leader of the Opposition Arnhim Eustace said on his radio programme on Monday.

“Thursday is the day when we hit the streets in our anti-corruption march, march for justice in St. Vincent and the Grenadines, our Ring De Bell memorial for E.G. Lynch…” St. Clair Leacock, an opposition MP and NDP vice-president said on the same programme.

Elwardo “E.G.” Lynch, a former NDP spokesman, died earlier this month, after a period of illness.

Meanwhile, NDP spokesperson, Sen. Vynnette Frederick said the party is encouraging persons to congregate outside it headquarters on Murray’s Road at 10 a.m., then the march will make its way around Kingstown before culminating at Heritage Square.

“People, come out with your flags, your placards. There are so many reasons for us to take to the street in St. Vincent and the Grenadines, and what your reality is, that which would bring you on the road, put it on a placard and come through,” Frederick said on the radio programme.

“This really is in answer to a call by the People of St. Vincent and the Grenadines to take action, especially given all the issues of corruption. I think the situation regarding the Registrar was really the straw that has broken the camel’s back in so far as corruption is concerned, but there is unemployment, there’s crime, there is the depression of the economy and the depression of the people,” Frederick further said.

Registrar of the High Court Tamara Gibson-Marks was asked to resign in May, amidst reports that some EC$300,000 from an account that she held in trust is unaccounted for.

“People are without hope and we have a government that is silent on anything that is critical to the interest of the Vincentian people, but on frivolity and nonsense, they want to kill us with distraction,” Frederick further said.

“And the people want to focus on what is critical to their own self interest as a Vincentian people. And that’s why we are calling on all Vincentians, regardless of your politics. This has nothing to do with political colouration. This is about the people of St. Vincent and the Grenadines reclaiming Hairouna” Frederick said.

And, Prime Minister Ralph Gonsalves told reporters in Vermont on Saturday that his government is still willing to lend the opposition bells to use in protest

“Well, I had promised them, if they wished, I can get all the bells from the primary and secondary schools to lend them, to give them, if needs be, so that they can ring the bell like fools along the street, having some entertainment,” Gonsalves told reporters in Vermont on Saturday,” he said.

“Ring De Bell” is the name of a Robert “Patches” King calypso that placed second during the national calypso competition this year.

Gonsalves noted that he only has the constitutional right to ring the election bell, adding that everyone else ringing bells is involved in entertainment.

7 replies on “Opposition to hold ‘anti-corruption march’ on Thursday”