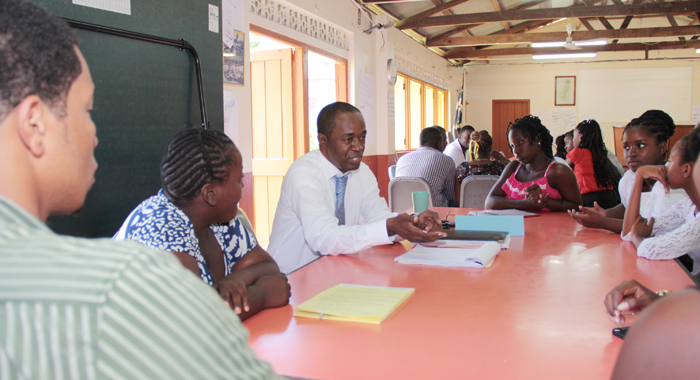 Lawyer Julian Jack speaks to campers about the legal profession.

A group of young campers took part in a career fair today at the Grace and Truth Campsite in Layou.

The fair was held to help youths to better understand different career options.

The professionals who participated in the fair were Julian Jack, a lawyer; Orande Bomani Charles and Joffre Venner of the SVG Association of Music Professionals; Andrina Lockhart, an accountant, farmer and business consultant; Kenton X. Chance, journalist; and Randy Thorpe, business owner and electrician.

The youths gained hands-on experience and one-on-one interaction with the professionals.

Sixteen-year-old Sacha Francis, a resident of Barroullie, told 19-year-old Shatica Cambridge that she wants to become a doctor to help to develop the Health care system in St. Vincent and the Grenadines (SVG).

Francis also said that she learnt about the different career opportunities in SVG that she can pursue to help to develop the country.

Another camper hopes to join the Police Force and become a Coast Guard Officer. He is 20-year-old Dary Bailey of Sandy Bay.

Bailey spoke to Ahzali Ollivierre, 13, of Sion Hill, and said that he is now more aware about electrical and construction services.

Calder resident 19-year-old Brenica Lewis stated that she wants to be a hairdresser because she loves doing hair.

Lewis told 20-year-old Debracia Joseph of Lauders Village that her “Plan B” is to become an accountant, because she thinks she can make more money in that area.

Michael Matthews, 15, of Brighton, told Joseph that he would like to become a family counsellor because he loves to see families together.

He, however, said that if that does not work out his next option is to become a teacher.

Deandra Browne, 19, of Green Hill, told Cambridge that she would like to become a childcare facilitator to create healthier minds and homes, and to cut down on teenage pregnancy.

She also said that she learnt that being a farmer isn’t a bad thing.

Some of the campers also gained hands on experience in news reporting and writing. They interviewed fellow campers and one of the professional, took photos, recorded a video interview and wrote this news story.

One of the facilitators, Andrina Lockhart, 27, of Campden Park, who is a farmer and businesswoman. She is also an accountant at the SVG National Centre of Technological Innovation.

Lockhart told Cambridge that she has an undergraduate degree in accounting and economics and a master’s degree in financial economics.

She said she started to farm because she was tired of applying for jobs, and she wanted to put her knowledge into practice.

The camp is organised by Youth Empowered for Community action (YECA).

Peace Corps volunteer Cassandra Richards, a project coordinator at YECA, said the model of the organisation is youth empowering youth.

The five-day camp brought together youths ages 13 to 25 from across the country.

They discussed various issues and ways of implementing change in their communities.

Campers worked on projects that they will implement in their communities in August.

One reply on “Young campers dabble in journalism (+Video)”