Anti-AIDS, pro-gay, or both? 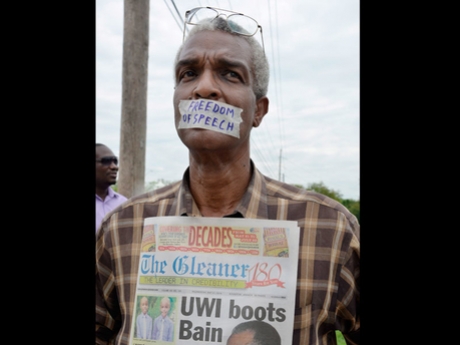 One of the most sacred of sacred cows in the global fight against HIV and AIDS is the mantra that archaic laws prohibiting homosexual conduct must be repealed in order to make further progress in controlling the spread of the disease. The logic that underpins this mantra is devastatingly simple: men who have sex with men are at a higher-risk for contracting the virus. Societal stigma against gay men complicates their access to AIDS-education and outreach, not to mention antiretrovival drugs and medical attention. Laws that ban gay sex underpin this social stigma and discrimination. Therefore, repealing these laws will result in real reductions in the number of new HIV infections and deaths among those already infected.

In recent months, there has been some newsworthy and unexpected pushback against this conventional wisdom from a number of Caribbean sources. First, Professor Brendan Bain, head and project manager of the Caribbean HIV/AIDS Regional Training Network (CHART), who said in court documents that, in his professional opinion, decriminalising homosexual activity would not necessarily lead to a reduction in the rate of HIV infections. Professor Bain was swiftly removed as head of CHART amid global outrage, because his opinion was apparently incompatible with the organisation’s mandate to “provide access to quality HIV & AIDS prevention, care, and treatment and support services for all Caribbean people.” (note: I’m not very familiar with Prof. Bain’s scholarship, so I’m not commenting on his research or findings).

Second, CARICOM heads of state and government, meeting in Antigua and Barbuda, rejected a document emanating from their own Pan-Caribbean Partnership against HIV & AIDS (PANCAP), which purported to commit them to fight the spread of HIV and AIDS through not only repealing the offending laws, but also encouraging churches to eliminate faith-based discrimination against homosexuals.

[Also, Caribbean churches across the region have been flexing their considerable muscle on this issue, most notably in a hastily-planned rally in Jamaica that drew over 25,000 chruchgoers opposed to “the homosexual agenda and the repealing of the buggery act.”]

Both Professor Bain and the CARICOM Heads are suggesting that the fight against HIV and AIDS and the fight for gay rights are separate and distinct battles, despite decades of international efforts to merge the two. The howls of indignation from regional and international LGBT communities – as well as international donors – are increasing in volume. PANCAP, whose excellent work is largely funded by foreign donors with an anti-discrimination agenda (their website lists “contributing donor partners” as the governments of Canada, the EU, Germany, the USA, the UK, along with the Clinton Foundation and the World Bank), is worrying where its next dollar is coming from. And an unlikely alliance of reactionaries, nationalists, Caribbean academics, bigots, homophobes, religious leaders and political opportunists have become emboldened by the words of Professor Bain and CARICOM heads – all seeing and hearing what they choose to see and hear in the recent controversies.

Some will say – perhaps with some justification – that the expressions of Professor Bain are simply the product of being influenced by virulently anti-homosexual Jamaican society, or that the position of the CARICOM leaders is a politically self-serving act of pandering to an anti-gay electorate. Others will point out that the Caribbean is second only to sub-Saharan Africa in HIV prevalence, and that most Caribbean countries outlaw gay sex. They will see a causal link between those two facts, and accuse anyone with a differing view of burying their heads in bigoted sands.

However, on this front, the CARICOM heads are actually right. It is not simply a legalistic point to say that the anti-AIDS and pro-gay fights are different things. It is a fundamental fact. And in the context of Caribbean societies, the fact is that dedicating scarce anti-AIDS resources to fight gay rights causes is not the most effective use of real or political capital – despite the very worthy arguments in favour of eliminating state discrimination against homosexuals.

First of all, let’s get past the heated rhetoric. The arguments conflating the anti-AIDS and pro-gay struggles are simplistic to the point of illogic. Yes, the Caribbean has high HIV rates and laws against homosexuality. But France decriminalized sodomy in the 18th Century, and has a liberal attitude towards homosexuality, yet prestigious medical journals have characterised the infection rate among French men who have sex with men (“MSM”) as “out of control.” The direct, causal connection between HIV rates and anti-sodomy laws is tenuous, at best.

So let’s look at how well or poorly the Caribbean, with its anti-sodomy laws, is doing in its fight against HIV/AIDS. Let us use as our source the Joint United Nations Programme on HIV/AIDS (UNAIDS) document “Global Report: UNAIDS report on the global AIDS epidemic 2013.” What it says about the Caribbean’s fight against AIDS may surprise you:

So, to summarise, according to UNAIDS, the Caribbean is doing better than most regions in (1) controlling new infections; (2) reducing prevalence among young people; (3) reducing prevalence among sex workers; and (4) providing medication to pregnant women with HIV. Even more remarkably, the Caribbean, with its anti-sodomy laws, is doing as well as, or better than most regions in the levels of HIV infection reported among men who have sex with men!

Dig a little deeper in the appendices of the UNAIDS report and you will see other interesting facts. For example, the Caribbean’s Estimated HIV Prevalence among adults has gone down from 1.3% in 2001 to 1.0% today. That prevalence rate is still one of the worst, besting only Sub-Saharan Africa’s 4.7%. However, it is interesting to see that the Bahamas’ 3.3% prevalence and Haiti’s 2.1% skew our regional average upwards. Why is this interesting? Because the Bahamas and Haiti do not have laws banning gay sex, yet their prevalence is among the highest in the region. Indeed, the Bahamas’ 3.3% prevalence is worse than that of 20 countries in Africa.

Now, I know that the naysayers will say that the Caribbean data is inaccurate, that anti-gay stigma reduces reportage among the MSM communities, or, worse, that government entities are intentionally misstating the scope of the problem. Me? I take this data as the UN reports and analyses it. Whatever grain of salt you want me to take with this Caribbean data, I don’t believe it to be any less accurate than the data for other regions of the developing world.

The unvarnished fact is this: in spite of the existence of laws that criminalise gay sex, the Caribbean doing better than ever in its fight against HIV and AIDS. And the Caribbean is currently making better progress than most regions in its ongoing battle.

Gay men aren’t the only stigmatized group at higher-than-average risk of contracting HIV. Sex workers (prostitutes) and intravenous drug users are also high-risk groups. Coincidentally, the Caribbean also has laws against prostitution and intravenous drug use. Yet very few donor countries or NGOs are claiming the decriminalizing of prostitution or drug use are necessary prerequisites to reducing HIV prevalence.

Yes, you can legitimately argue that criminalising gay sex is more central to a gay man’s identity than the “occupational” or “recreational” prohibitions against prostitution or drug use. But that’s a gay rights argument, not an epidemiological one. And it reinforces the separation between the anti-HIV and pro-gay battles.

Let us not pretend that the ancient anti-sodomy laws we inherited from the United Kingdom are the source or cause of the Caribbean’s homophobia. Repealing these laws will do next to nothing in changing the minds or mores of those who are virulently anti homosexual. Nor should we pretend that the Caribbean has static, unchanging views on homosexuality. Young people have different views than old people. People who watch “Modern Family” and “Will and Grace” on their imported US cable TVs may have different views from those who do not. Church goers and Dancehall music aficionados can discuss homosexuality in different terms than those with more secular interests. People have friends and family members who are “out” as gay or lesbian. The Caribbean view on homosexuality is more complex and nuanced than it was 50, 20, or even 10 years ago. Even though the laws against sodomy remain on the books.

Those who lash out against laws that “criminalise private sexual conduct between consenting adults” need to recognise that most societies have such laws – laws against prostitution, or adult incest, for example, both disregard the issues of privacy and consent in pursuit of some perceived greater moral good. Should these victimless crimes also be taken off the books?

That said, our existing laws and constitution are actually fruitful ground for legal activism by gay right proponents. Our constitutional protections of privacy, due process and nondiscrimination can certainly be interpreted as placing what happens in the bedroom between homosexuals off limits to state intrusion. All that is needed are the right facts, the right lawyers and the right judge(s). As recently as 1986, the US Supreme Court said that nothing in their constitution prohibited anti-sodomy laws. By 2003, the same US Supreme Court, interpreting the same constitution, struck down those same laws. In the Caribbean, we all have “Recognition of Marriage” statutes, which say that if you’re married in a foreign jurisdiction (UK, USA, etc.) then that marriage is automatically recognised in our countries. What happens when married gay couples show up at our registry demanding official recognition of their union?

(I could go on, but I’ve generally stopped giving free legal advice).

Whether or not the anti-sodomy laws should be repealed is a question worth asking (and answering). Whether private gay sex, public gay displays of affection, or gay marriage can or should be countenanced by Caribbean societies are issues that are increasingly difficult to duck. Whether gay rights are universal human rights or externally-imposed Western European values that infringe on Caribbean sovereignty is open for debate. Whether there is something special about Caribbean morals that exempt the region from the global movement towards increasing acceptance of homosexuality requires careful consideration.

These are debatable, divisive, contentious issues in the Caribbean. The fight against HIV/AIDS is not. The overwhelming majority of Caribbean citizens want greater HIV/AIDS education and access to quality care for all who need it. We want people to get tested. We want cheap, readily-available antiretroviral drugs. We want cheap, available condoms. We want trained, empowered medical personnel. We want effective treatment to prevent mother-to-child transmission of HIV. We want to arrest and eliminate the spread of HIV in the Caribbean, and we want to ensure that people with HIV live long, productive, lives, free of stigma and discrimination based on their illness.

Conflating these unanimous goals with the acrimonious controversies surrounding the gay rights agenda can only serve to weaken our shared resolve to win the war against HIV/AIDS. Reasonable minds can differ about whether it is “worth it” to use the anti-AIDS movement as a vehicle to advance gay rights. But reasonable minds really shouldn’t pretend that the two issues are one and the same.

(Camillo Gonsalves is a senator and Minister Foreign Affairs, Foreign Trade, Consumer Affairs and Technology in St. Vincent and the Grenadines)