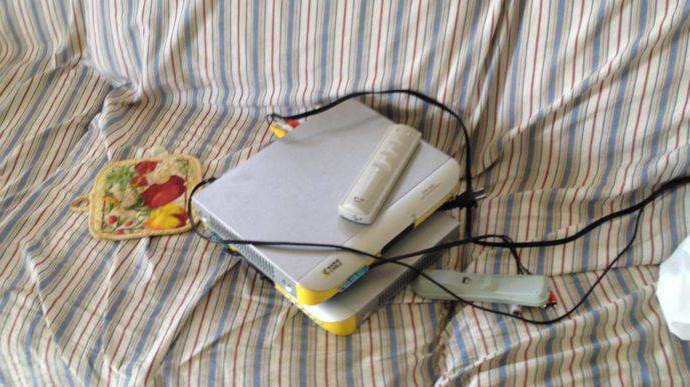 Some persons have returned their set-top boxes to FLOW. (Photo: WE/Facebook)

The citizens who organised the petition demanding better service from FLOW, met with the company last week, and discussed a range of issues, including the lack of warning about the availability of sexually explicit content, when the company opened up it entire line-up earlier this month.

The group, in a post on its Facebook page, “Stop Flow Now”, said Gordon told them that as of July 31, 2014, the company will revert to the basic package offered by Flow, and not the Karib Cable package that includes, GSN, Bravo, OWN, etc.

Many consumers have expressed displeasure with the changes that FLOW made to its basic package earlier this month, removing some of the more popular channels.

The company said that the changes were necessary because of its obligation to offer only content legally cleared for St. Vincent and the Grenadines.

The company this month opened most of its channels to its customers, but will revert to the various packages on Thursday, WE said on Facebook

The company told the meeting that the transitioning period to the Flow system could last 18 months.

“WE then asked that channels that are now open remain open until the end of the transition period or that some adjustment be made to the cost of the basic package which now seems to be a price increase as the value of the package has been decreased, however both suggestions were refused,” the group said.

“WE insisted that Flow’s basic package is simply not of an equal or better value to that which was offered by Karib Cable,” WE said.

Twenty-six channels were removed earlier this month, and Gordon told the meeting that he could not guarantee that any of them would be added to their packages in the future.

The group said it expressed concerns about nudity and profanity, as many of the channels that were open contain shows that are not suitable for young audiences.

“The response of one of Flow’s technician who was present is that persons could call the office to get a code to block the channels. WE then asked why wasn’t the public warned/informed before the channels were open … no answer was given,” the group said in its Facebook post.

The channel line-up this week suggests that the company has removed the adult channels that the group complained about.

Regarding channels that are available in other Caribbean countries but not St. Vincent and the Grenadines, Gordon told the group that Flow is still in the process of regularising their operations in SVG, but he could not guarantee that any of the 26 channels that were removed will be returned.

“The manager gave his assurance that they will try their best to ensure that all customers receive bills in some form,” WE said.

A late fee will be calculated on the total outstanding due at a rate of 2.5 per cent.

The group said FLOW told them that in some cases the cable wiring in homes will have to be redone. If a customer has surface wiring, FLOW will stand the cost of workmanship.

Otherwise, Flow will only give wires.

FLOW told WE that some homes might not need to be rewired, but one of its technicians will have to make determination.

“According to the representatives present, some of the wiring used before are not of the standard Flow needs,” WE said.

The group said it also suggested that FLOW returns to the two-digit numbering and allow SVGTV to remain as Channel 9.

“Mr. Gordon said that he noted the suggestion,” the group said.

The group discussed with FLOW the frequent disruptions to its Internet and cable services.

“The excuse given was that interruptions are not usually Flow’s fault, because they often occur when there is a power outage at their signal points.”

The group said it told Gordon that Karib Cable sent out information to customers through a messaging system on the television (a little envelope that would appear on the screen).

The Manager said he was informed that most Vincentians did not know what the envelope meant, but will look into the possibility of reactivating that service.

Regarding telephone calls to the company, Gordon said all calls will be sent to a call centre in Trinidad and will be further directed based on the nature of the call.

He added that if persons wish to speak to someone they know in the office, the best way to do so would be to acquire that person’s extension number.

“WE suggested that Flow issue an apology to the Vincentian public, because too many customers are dissatisfied and continue to feel slighted by the company. No response was given,” the group said.

“The Local Manager and his team were alerted to the fact that many Vincentians are considering returning their packages and refusing to convert to the new cable system. No response was given,” WE said in its Facebook post.

Some members of the group returned their set-top boxes to FLOW this week.

Earlier this month, the group collected more than 1,000 signature petitioning FLOW to improve its service.

The peition highlighted what it said were a number of errors that FLOW has made since commencing operation in St. Vincent and the Grenadines.

The petition said Flow has and continues to show blatant disregard and disrespect to the Vincentian public.

It further said Flow has failed to sensitise the public on what would be their mode of operation in relation to the delivery of cable television and Internet services. The petition also spoke about lack of consultation with customers when creating packages, and FLOW’s customer care agents, who, the petition said, are “either unable, or unwilling to help customers who seek information on the services Flow offers”.