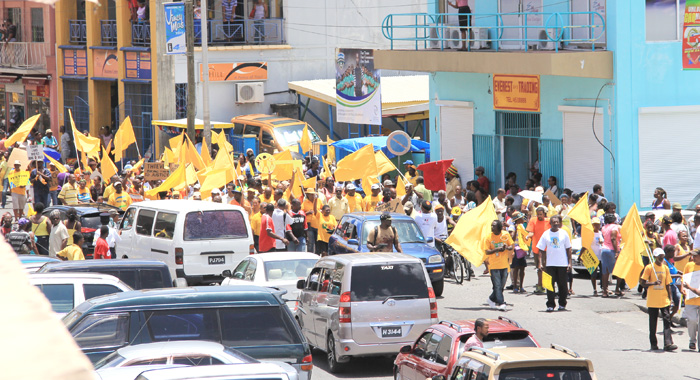 A section of the march in Kingstown on Thursday. (IWN photo)

Preamble: I cannot show a political party how to win an election, but I sure can tell them how not to lose one.

Many persons have had their say about the smallness of the NDP’s recent march in Kingstown; and rightly so. It was a march with the smallest crowd ever assembled/organised by any political party since One Man One Vote took effect in St Vincent and the Grenadines.

(Scroll for I-Witness News video of the march)

The NDP needs now to go back to the drawing board in terms of the mobilisation of its supporters instead of Major blabbing his mouth that all co-operation between opposition and government is off the table.

The march failed miserably and a deeper look within the party needs some urgent attention.

If history can be a guide, then the NDP should not press the panic button (don’t touch that Red Button!).

Just about two days before the referendum, almost 40,000 gathered at the Diamond Dairy area for a concert put on by the Yes Vote Committee.

The results of the referendum showed that it was only in two constituencies the Yes Vote was carried.

The pathetic-looking march and the winning of the referendum are not the only variables the NDP needs to take into consideration for the next general elections. Some gag need to be placed on the mouth of Major, the Canadian-accent candidate and some loose lips around the NDP, including Sir James.

A consideration the NDP must also take into account: is the physical death of E.G. the political death of Arnhim and the NDP?

This question was raised in relation to the ULP when Glen departed, but the party took time out and built on its propaganda machine, with first recruiting Hans, then Crick came on board after he was cut by Cable and Wireless and Ballah, after his not-so-good stint at the NLA.

Burns quickly skipped the NDP, Star Radio was born and the likes of Sehon and Dennie came with creativity and the ULP propaganda machine was well oiled and on its way, which allows for the party to still be in office, and hopefully heading for a fourth consecutive term.

The NDP has lost a voice in E.G. and the many hosts it has hosting its New Times radio programme are not helping the party’s cause.

The party needs a voice and the removal of Bert or Margaret from their night programmes may help. Or, why not work out a deal with Knowledge? He has radio experience and a passion for politics.

Whatever plans the NDP has for the next general elections the party can only succeed if it can overcome the political guile of a leader, who has with him some very ambitious, young and upcoming politicians who are bent on winning.

The NDP needs to forget about this ring the bell; that is only to satisfy the entertainment base of the party. Real hard work needs to be done and the more entertainment the party organises, the more frustrated those like Major will become, when the anticipated crowd is not present.