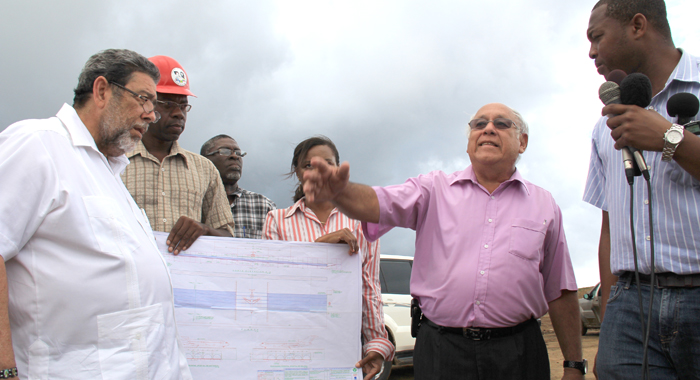 Prime Minister Ralph Gonsalves, left, in August led his Cabinet on a tour of the Argyle Int’l Airport. (IWN photo)

That is the timeline that head of the state-owned International Airport Development Company (IADC) wants Vincentians to fix in their minds for the nation’s first international airport to begin receiving flights.

“We are working steadfastly to complete this international airport — well I say substantial completion of this airport project — by December this year,” Rudolph Matthias, chief executive officer of the IADC, told journalists on Thursday after the Cabinet toured the facility.

“And those who did not believe, who sometimes don’t listen to what we say, and who perhaps sometimes question, I am sure that now that you have visited and you have seen for yourself, I am sure that you would admit that we have made substantial progress and it is quite possible that this project can be completed by the end of this year, barring extreme adverse weather conditions,” Matthias said.

Since then, the project has missed several completion date, but Gonsalves, told the media after the tour he is satisfied, that notwithstanding challenges with the disbursements of funds already secured, the project will be substantially completed by the end of this year.

“Oh, the progress has been excellent. We had given different timelines for substantial completion and we got setback with a number of things, technical and availability of money on time,” he said at the end of the tour, which came one week short of the sixth anniversary (Aug. 13) of the actual commencement of physical work on the project.

In addressing the issue of cash flow for the EC$700 million project, Gonsalves said that IADC last year requested US$80 million for the completion of the project.

He spoke of US$20 million that should have come from the sale of state-owned land in Canouan.

Two developers are involved in that regard, but a disagreement between them have resulted in US$9.25 million of that sum remaining unpaid to the government.

“I could not have expected, for instance, that I would have had trouble getting all of our 20 million from the developers to whom we sold the land, but a dispute arouse between them and created some dissonance and we have been an unwitting, not victim, but we have not received what we are supposed to receive on a timely basis,” said Gonsalves, who is also Minister of Finance.

The government is also awaiting the disbursement of the final $10 million of a $40 million loan from the ALBA bank in Venezuela.

Progress on the airport was also impacted by the delay in removing some petroglyphs from a hillside.

Initially, the government of Egypt had agreed to remove the petroglyph, but that plan went off track after the Arab Spring.

Argentinian experts removed the petroglyphs earlier this year, and work on the excavation of hillside is underway.

“… we became prisoners of the Arab Spring , the fall or Mubarak, all the activity with Morsi and then the fall of Morsi, until, finally, we had to go other places. But, a lot of time was taken up with communication,” Gonsalves said, adding,  “Those are the things, but we have done substantial work.”

Meanwhile, Matthias gave an overview of some of the work that is still to be done on the airport.

“… we are substantially advanced on the runway. It is prepared now to a level where we need to start applying the base material, but the engineers have advised that we perhaps should not begin to apply the base material until we are ready to start paving the runway,” he said.

“So, what you see out there is essentially almost now ready to receive the base material and to receive the final asphalt that we are going to put on the runway.”

He further said that concrete works on the apron began in July and are “progressing fairly well, considering the adverse weather conditions that we have had in July.

The fire station and terminal building are under construction, and are expected to be completed before the end of this year.

Engineers and other staff are also working to span a river, which will run under the runway.

The terminal building was handed over to the government at the end of last year, and retrofitting is underway.

Matthias said the IADC has entered into contracts with several suppliers of equipment to be installed in the terminal building.

The two air bridges, along with the equipment inside the terminal building, such as conveyor belts, scanner, counters, and furniture, are yet to be installed.

“All of this are work that we are doing behind the scenes, and I suspect that if you were to visit us here again in December, that much of that will be already installed.

He, however, noted that there are other processes after completion o the physical works, before the airport can begin accommodating flight.

“Let us understand and remember that substantial completion of construction is not the same things as the beginning of airport operations.  Once we have done the construction work and the retrofitting of this terminal building, there is a lot of work that we have to do behind the scenes before we can make this airport ready to receive flights,” he said.

Matthias told journalists that his company has to work with the Eastern Caribbean Civil Aviation Authority and Kingstown’s Director of Airports to prepare the airport to start receiving flights.

“The best thing to think about is that we are trying to get this airport become operational by midyear next year.

“If you ask me a date, that is the date I think you might want to fix in your minds, that sometime mid next year, God’s willing, we should be able to receive international flight here at Argyle. I pray that things work out as we plan,” Matthias said.