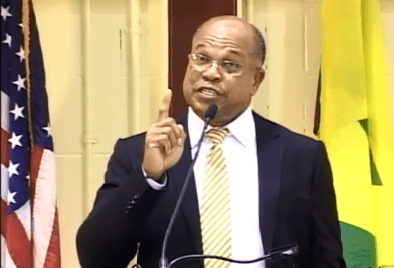 An opposition lawmaker is questioning whether St. Vincent and the Grenadines has changed it theft laws.

Sen. Linton Lewis, who is also a lawyer, asked the question as he addressed a town hall meeting of his New Democratic Party in New York on Saturday.

Lewis, who is chairman of the NDP, said that young people are often brought to court for various matters, such as stealing a can of sardine, smoking marijuana and using expletives.

“… the last time a young man stole money — I think it was 350 dollars, he was brought before the court for theft,” Lewis said.

“The government doesn’t deal with small issues. If you want not to have the police to come and deal with you, you have to deal with 300,000 dollars or more, and then they will understand.

“If you take 300,000 you should have some left to pay back, so you can pay back 100,000. You wouldn’t spend all of it, so pay back some of what you have and we will give you an opportunity, sometime down the road, to get it to borrow from a bank and pay it back so you would not be held by the police and arrested for anything,” Lewis further said.