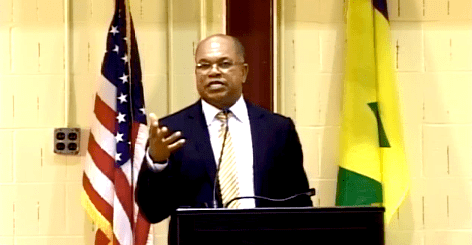 Chairman of the opposition New Democratic Party (NDP), Sen. Linton Lewis, has described the Ralph Gonsalves-led Unity Labour Party (ULP) administration as the worst in the history of St. Vincent and the Grenadines.

Lewis made the assertion at an NDP town hall meeting in New York on Saturday, where he also said that each administration had done some good for Vincentians.

“However, although it is correct to state that some of the programmes of the ULP have benefitted a section of the population in St. Vincent and the Grenadines, it is also undeniable that the ULP administration has been the worst in living memory, that has ever governed our beautiful homeland,” he said, and presented reasons for coming to that conclusion.

He said the ULP boasts about the education revolution, the low and no income housing projects and the international airport under construction in Argyle.

But the ULP, which came to office in March 2001, has tremendous efforts to improve education in SVG.

“Whereas those efforts on the one hand are commendable, on the other hand there is some cause for concern about the manner in which those opportunities have been divided up among our people,” Lewis said.

He said there are rampant complaints about political victimisation, discrimination, favouritism, cronyism and nepotism, and those complaints have reduced the gains that were made and cast a cloud of doubt over the fair and equitable distribution of those opportunities.

“The indecent haste towards universal secondary education has resulted in an unfortunate increase in truancy and juvenile delinquencies,” he further said, adding that ULP administration did not place sufficient emphasis on primary education, as children were promoted from one class to the next without having the requisite reading, writing and numerical skills to enter a higher class.

“They were placed in secondary schools even though they failed the common entrance examinations. Unfortunately, for those poor children they were exposed to a level of work for which they were not prepared and so many of them were unable to do the work in and out of the classroom.

“School was no longer a happy place to be. For many, failure became the norm rather than the exception and so many had to leave school either because they had failed too often or that they were subjected to grave embarrassment of having to feel inferior within the class room and among their peers,” he said.

Lewis said teachers were complaining that the children were unable to read and therefore could not understand the work that was given to them, and in some instances, 75 per cent of student did not graduate.

“Admittedly there have been some success stories of the universal secondary education project but when compared with those who have suffered, those success stories are few and far between,” Lewis said, and commended the students who completed their course of study.

Lewis, however, said that in SVG, most persons who have achieved a university education have concluded that unless they say what they think the political directorate wants to hear then promotion, upward mobility or career growth will not be forthcoming.

“It is a feeling that is unfortunately justified because upward mobility or career growth is not dependent on ones ability and effort as much as ones affiliation overtly an otherwise to the ULP,” he said.

Lewis further said the ULP administration removed from the primary schools the woodwork and home economic centres that provide basic training in carpentry and food and nutrition respectively.

“We in the New Democratic Party value education immensely,” Lewis said, and announced that an NDP administration will re-introduce skills training as a matter of urgency by using community centres and suitable personnel at appropriate times to conduct these training throughout the country.

He further said an NDP administration will emphasise the improvement of primary education to ensure that children are able to read and write at their age level.

“Children who are slow learners will have access to remedial teaching to bring them up to the minimum standards required of them,” he said.

Family background or financial status must not be a hindrance to access to good primary and secondary education, Lewis said, adding that the NDP will ensure that there is equality at the outset in education.

He said the party will ensure that primary schools, regardless of their geographical location in SVG, are staffed with suitably qualified teacher, and added that the nation needs to seek the assistance of health care professionals who can attend adequately to the needs of those who are less fortunate and those with learning and other disabilities.

Lewis said the ULP’s Youth Empowerment Service (YES) and Supportive Education and Training (SET) programmes have the potential to relieve some of the frustrations and the financial burdens that many young people endure.

He, however, said there are complaints of victimisation and discrimination in the selection process.

“In the absence of hope, there is confusion and in the face of temptation there is a loss of self control, a lessening of pride and dignity, a preponderance of self pity and a weakening of the fabric of our society.”

Seventy-five per cent of crimes in SVG are committed by persons under the age of 35 years, Lewis said, adding that many of the approximately 25 persons murdered each year are young persons.

“The year 2014 is reminiscent of 2007 when 37 persons were killed of which 58 per cent fell prey to the barrel of a gun. The question is where do we go from here as fear continues to tarnish the picturesque landscape of beautiful St. Vincent and the Grenadines.

“Unless the New Democratic Party takes office … the decadence will not cease, the moral decay will be prolonged and the lovely people of our beautiful homeland will continue in total bemusement as to their existence and life’s trajectory.