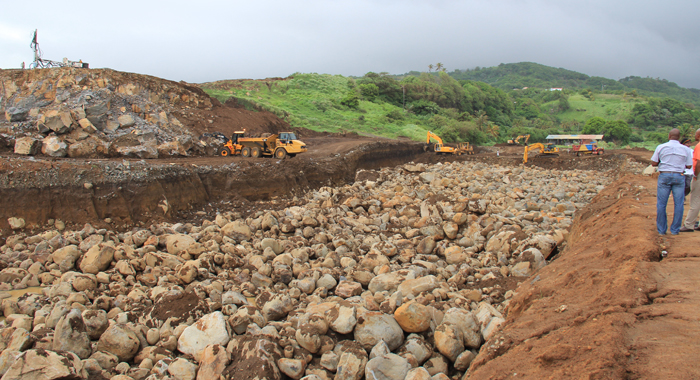 Spanning the Yambou River is among the work left to be done at the airport. (IWN photo)

With less than a year before the Argyle International Airport is expected to begin operating, Vincentians are being encouraged to position themselves to take advantages of opportunities in tourism and agriculture, the two main sectors of the economy.

“We want the private sector to come on board with their part in tourism, with agriculture,” Minister of Agriculture and Fisheries Saboto Caesar told reporters on Thursday, after Cabinet toured the construction site.

“I continue to mention that many of our farmers in St. Vincent and the Grenadines will be benefitting significantly from the Argyle International Airport,” he further said at the end of the tour, which came on the eve of the sixth anniversary since actual construction of the EC$700 million project began.

“We have had a problem where we have markets in the United States of American but we do not have the means of getting the fish to the U.S. markets in a timely manner when the fish is still fresh,” he further said, adding that the new airport, being build on St. Vincent’s east coast, will help to solve that problem.

The new airport has missed several completion deadlines, but the government said it is is expected to be “substantially completed” by the end of this year, and operationally by mid-2015.

And Minister of Tourism, Sports, and Culture, Cecil “Ces” McKie, said the international airport will open up new possibilities “for persons throughout the length and breath of St. Vincent and the Grenadines, home and aboard.

“The number of opportunities that are available, I want us to enhance our positioning to capitalize on these opportunities, not just within the facility itself but also in the surrounding communities,” McKie further told reporters.

He said the government will discuss with the various sporting disciplines the possibility of inviting teams to SVG to play, and encourage travel by local squads.

McKie also said that with the new airport, the possibilities in the agricultural sector “are endless”.

“I think the farmers in this country they are responding positively, we are opening up markets in the region and also extra-regionally. Vincentians in the diaspora have been calling for their agricultural produce, so it means that our farmers have to step up, persons who are not engaged in farming activities have to step up, so that we can maximize those opportunities,” he said.

At the same time, tourism officials, based on feedback from visitors, have been urging artisan to produce smaller craft items.

“But we have to encourage them to increase their production quality and quantity so that we can have these items available to the visitors when they come in,” McKie said.

He also outlined some of the opportunities in the hospitality sector. “I am sure that persons are already eyeing up or setting up whether bread and breakfast or medium to large scale hotel facilities.”

He said the government is urging persons who own land close to the airport “to make a move now.

“They need to set themselves up to take advantage of those opportunities that will present themselves.

“I think Vincentians have that opportunity to benefit from this facility and I think we need to ask them to examine, very closely those possibilities and act on them.”

But while McKie said he was “very impressed” with the progress on the new airport, adding, “Vincentians can be extremely proud of what we ourselves have fashioned and are about to complete”, he acknowledged that “a lot of persons have been debating on when the facility will be completed”.

The airport has already missed several completion deadlines, with the latest set as December 2014.

“I don’t think that is up for debate anymore, the most important thing is that we will be completing the international airport at Argyle and in short time we will have it opened for persons to fly out and to fly in,” he said.

But much work still remains to be done on the airport, including the paving of the runway, competition of the control tower and aircraft rescue and fire station, and the spanning of the Yambou River, which runs across the runway.

“We are working steadfastly to complete this international airport — well I say substantial completion of this airport project — by December this year,” Rudolph Matthias, chief executive officer of the IADC, told reporters at the end of the tour.

Bradley Francis, chief executive officer of Franco Construction, the firm constructing the control tower, said work commenced in January and his firm has sought an extension of the completion deadline because some changes were made to the design.

“And we anticipate practical completion by the 15th of September,” he, however, said, noting that Areonav, the Canadian firm that won the contract to build the cabin at the top of the tower, arrived in St. Vincent last week, and has begun their.

“All the bolts are up in place while the finishing work is going on inside,” Francis said.

Meanwhile, Richard Lubang of Areonav, a Candian firm, gave an update on the work that his company is doing on the control tower.

“Right now, we are in the process of setting up our equipment and our material and in the next week we will be starting the installation of the control tower, which actually would take a good 10 to 12 week before we get a completion of the tower itself. And, afterwards, we will come in and do the electronics and what not to get this tower finished and up and running soon,” he said.

At the aircraft rescue and fire station, men where busy plastering the walls.

Anderson Yarde, project manager for Innotech Services Ltd., the Barbados-based regional firm that is constructing the fire station, said the building is between 65 and 75 per cent complete.

“We have procured all the necessary material — door, windows, all that are here to be installed in the next couple of weeks. And we are hoping that definitely in October for sure that we are going to be there,” he said.

“The foundation is finished, the superstructure is up in the air and we are getting the roof on and getting the building weather tight so that we can start our finishes and basically hand over what we hope will be a pretty nice and complete building to the government of St. Vincent in October,” he said, adding that construction is on schedule and “in line with the budget so far”.

Matthias said the IADC expects Innotech to meet the completion deadline. “I expect that Innotech will complete this building and hand it over to us so that we can start the process of preparing ourselves for the operational phase of the airport.”

At the end of July, workers had already poured 2,576 cubic metres of concrete, or 367 concrete slabs.

Garcia said that the capacity of the concrete batching plant, which can produce 60 tonnes of concrete mix per hour, meets the construction needs at the airport.

“It’s a pity that we are not pouring any concrete today, but, because of the weather conditions, we couldn’t pour any concrete today,” Garcia further said, adding that the teams are working to complete the paving of the commercial apron by the end of November or early December.

“At present we have two teams working and their plan it to do 30 slabs a day within a 20-day period in a month.”

A third team is working on the northern end of the runway and pavement works is expected to begin there soon.

By mid August, two additional teams will be incorporated and pavement works will commence in the general aviation apron.

The capacity of the concrete batching plant also allows for work to be done on the general and commercial aprons at the same time, and Garcia said the plan is to complete the pavement by December.

“The only limiting factor that we have in meeting this plan is the weather conditions. Once it rains, we have to wait 24 hours before we can place any concrete. We have to meet this requirement, because, for us, the most important thing is he quality,” Garcia said.

But finances is also a limiting factor at the airport, as the project has been negatively impacted by cash flow issued, even as the government has secured the US$80 million that the IADC said last year it needed to complete the project.

Prime Minister Ralph Gonsalves said his government is still awaiting payment of the final US$9.25 million from the sale of land to two developers in Canouan.

The money remains outstanding, as “some dissonance” has arisen between the two investors.

The government is also awaiting the disbursement of the final $10 million of a $40 million loan from the ALBA bank in Venezuela, EC$5 million of which should have arrived in July.

And, in addition to the spanning of the river, workmen are removing ma ountain of rock – Petroglyph Hill — from which petroglyphs were removed earlier this year.

The removal of the mountain is scheduled to be completed by next May, but this is not expected to affect that actual airport facility.

Matthias also said works are underway to complete the retrofitting of the terminal building, which was handed over to the government last December.

He said the IADC is hoping that all construction works will be completed by the end of December.

He, however, added if this is not the case, the company can use the first half of next year, while undergoing the certification process, to complete construction works.