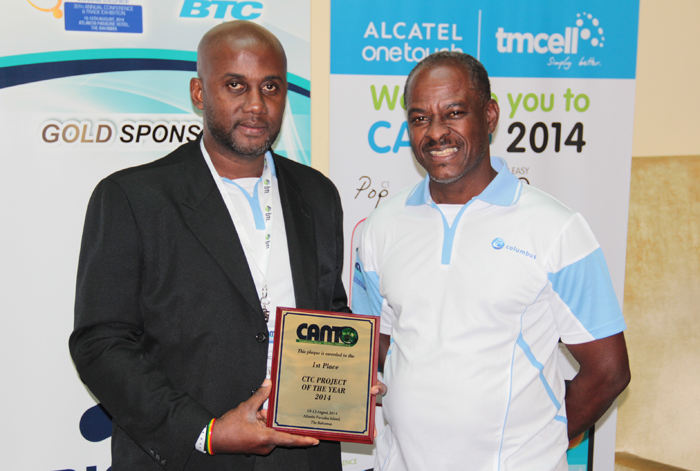 Kyron Duncan of the NTRC and Director of Telecommunications, Jerrol Thompson pose with the award. (Photo: Kenton X. Chance)

NASSAU, Bahamas, (CMC) — A project implemented by the St. Vincent and the Grenadines government to assist nationals acquire higher education, has won the “Connect the Caribbean Project of the Year 2014” award.

“I am proud to represent St. Vincent and the Grenadines in this competition, and, hopefully, we will enter this competition next year, where we would win first place once again,” said Kyron Duncan, the administrator of the Universal Service Fund.

The SMART Project was implemented to facilitate the necessary infrastructure at the Community College to enable it to offer existing courses and programmes online and in real time.

The award was presented Wednesday during the 30th annual conference and trade exhibition CANTO, a non-profit association of operators, organisations, companies and individuals in the information communication technology (ICT) sector.

Duncan told the Caribbean Media Corporation (CMC) that the project was an EC$1.7 million (One EC dollar = US$0.37 cents) contract with telecommunications service provider, LIME.

“This project provides Internet access at EC$10 per month for one megabyte connection to a maximum of 340 households throughout St. Vincent and the Grenadines,” he told CMC after collecting the award.

Duncan said the project also provided a new information communication technology (ICT) lab at the Technical Division of the Community College, and provides persons the ability to do their course from anywhere.

It also includes a subscription to Blackboard Collaborate, which provides a comprehensive online learning and collaboration platform designed specifically for education, which allow students to access services from the SVGCC anywhere at anytime.

Meanwhile, Kingstown’s telecommunications director, Jerrol Thompson, said he is “extremely proud” of the award, which was previously won by three other Caribbean countries.

“I think this is a vindication of the policies of the government of St. Vincent and the Grenadines and its regulatory authority. I had quite expected that the schools’ project, which is one of three entries that were submitted by the St. Vincent and the Grenadines, would have actually copped the first prize,” Thompson, a former minister of science and technology said.

Second and third place winners are expected to be announced later on Wednesday.

Thompson, however, said he was not so surprised that the smart project won the competition.

“We can be particularly proud that they are using technology that’s used by many universities throughout the world. I think that what swayed this was the fact that in this project there was the delivery of Internet connection to underprivileged homes for just $10 a month.

“The judges indicated that this was something significant, combining that with the high level of technology at the community college, I think, was very important,” Thompson said.

“We are going to continue with some of these policies that we have and right now, [under] the schools’ project, teachers are being trained to deliver the classroom management software for the secondary schools, and I think this is definitely going to take St. Vincent and the Grenadines much further in terms of its ICT and education development,” he said.

In determining the winner, judges looked at the extent to which the ICT initiative incorporate the three building blocks of the World Summit on the Information Society and the International Telecommunication Union’s Connect the World framework, namely enabling environment, infrastructure development, and development of services and application.

2 replies on “SVG wins ITC project of the year award”