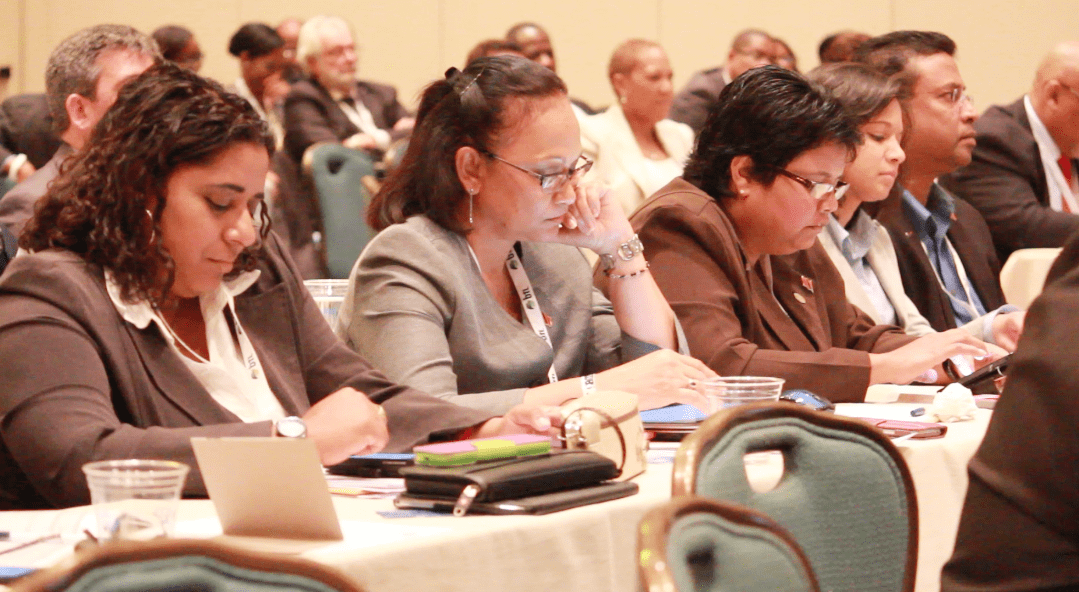 Persons use mobile devices during a session in The Bahamas in which service providers suggested that some apps be blocked.

NASSAU, Bahamas — Ministers of telecommunication and service providers in the sector on Tuesday failed to agree on how to deal with Voice over Internet Protocol (VOIPS) platforms such as Viber, which mobile data providers say use their resources without paying.

In some markets in the Caribbean, access to these VOIPs through cellular data has been blocked.

“Put simply, this is an unsustainable situation, one that a number of industry players have been trying to address for some time now, and one that no one has been able to successfully overcome, and one that we are tackling head one,” Mara said.

“Not only are we happy to take it head on, but a number of operators in the region will be tackling this issue in the coming months, because this is not something that can be sustained,” he told the gathering.

He compared the situation to a country drilling and oil well, “and some hobo came along and say, ‘I am going to pipe into this tanks, take your oil, pay you no money, because I have got customers that I want to sell that oil’”.

He further said the situation results in significant loss of revenue for telecommunications providers, and, by extension, the government of countries where they operate.

The loss of revenue to the operating company is around US$500 million, and hence governments in the Caribbean will lose around US$150 million in the coming years, Mara said.

“And this is a huge problem not just for CARICOM countries, it is a problem for a problem across the world…

“These are parasite — these operators. They are not genuine operators like Twitter or Facebook, who have invested significant funds. These people are thieves. There isn’t any milder way to put it. … These people make no contribution to your societies and it has to stop. So, I am asking you now regulators to address this issue with the various operators,” Mara further said, adding that to date the only people making money from these VOIPS are venture capitalists.

But Minister of Telecommunications in Dominica, Ambrose George, said  the issue of net neutrality, in which the internet is seen as a whole of information sharing using varying types of data transmission “poses another interesting view point.

“Internet traffic is simply data, whether it is telephony, e-fax, text, audio, etc. Hence, there should not be any form of discrimination of data based on its origin or type or nature,” he told the meeting.

Digicel executive and CANTO director, Julian Wilkins, told ministers that telecommunication providers do not have issues with “over the top” — “unregulated” — companies like Whatsapps, Instagram and Facebook.

They object to platforms such as Viber using their data services, because these VOIPS “paying taxes, license fees, and particular, we have problems with unlicensed, number-based voice over IP providers,” Wilkins said.

“From Digicel’s position, where telecoms providers are competing in the same market, we would like the same rules and legislation must be applied on order to keep a level playing field,” he further said.

But James Fletcher, St. Lucia’s Minister for Science and Technology, Information and Broadcasting, said telecommunications providers are being affected in much the same way as stores in Castries as more St. Lucian shop online and take advantage of the country’s duty free barrels provision at Christmas.

“Unfortunately, VOIP has done the same thing for the service providers. There is a demand there that is not being met. And, like my colleague from Jamaica, I would be a lot happier if it were a Caribbean VOIP solution. But the solution cannot be to get rid of VOIP, because there is a very significant demand that these people are providing,” he said.

Phillip Paulwell, Minister of Science Technology in Jamaica, said he believes that there is a sensible way out of the situation, “recognising that the greater goal is to get our people to have access to data services and we have distinguish that from some of the other services that are plain old telephone services”.

Fletcher said that in the same way that ministries of agriculture across the Caribbean encourage persons to buy local produce, there must be a local solution to the VOIP issue.

“… people are not just using those VOIPS for frivolous matters. They are using them to communicate with family members who before they could not communicate with; businesses are using them,” Fletcher said, and called on stakeholder to “agree on a way in which we can come up with an option that works for all concerned”.

He said Caribbean nationals want to be able to call their relatives overseas “and not pay an arm and a leg, to the point that they have to schedule these calls once every two months.

“That (cheap/free frequent calls) is what they are used to. So, to tell them that they cannot use Skype, they cannot use Vonage, they cannot use magicJack and not provide them with an alternative is really asking a government, which is made up of politicians, who every five years have to face an electorate for re-election, to commit suicide. It does not make any sense,” Fletcher said.

5 replies on “Ministers reject suggestion to block Viber, other VOIPs”