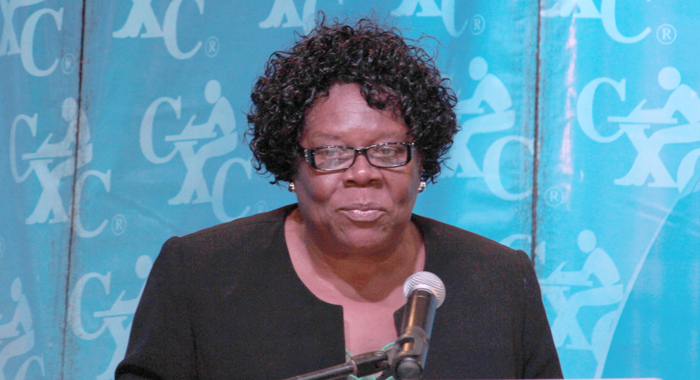 She, however, also called for closer attention to the quality of some of the passes.

“While we are pleased to report that there is an improvement this year in the majority of the schools in the CSEC, we admit that we have to pay close attention to the quality of the passes and to the performance of our students on some of the most critical profiles, such as comprehension, expression, and application,” she told a ceremony in Kingstown last week, where the Caribbean Examination Council (CXC) released officially the results of this year’s exams.

Charles Mayenga, senior assistant registrar of CXC’s Examination Administration and Security Division, told the ceremony that Vincentian students outperformed their colleagues across the region in 16 units of the Caribbean Advanced Proficiency Examination (CAPE).

The ceremony was held to launch the results of the 2014 CXC exams.

Mayenga said 88 per cent of the Vincentian students who sat CAPE exams this year attained acceptable grades (Grade I-V), compared to a regional 90 per cent.

In the CSEC exams, SVG obtained

SVG also performed better than the region, overall, obtaining a 66 per cent pass rate, compared to the regional 61 per cent.

In 21 out of the 32 subjects, SVG had better overall performance compared to the regional performance.

Miguel thanked and congratulated teachers and students and expressed hope that the overall pass rate will continue to improve.

She said the performance of students in CAPE is “decidedly commendable”, adding that the director and staff of the St. Vincent and the Grenadines Community College must be acknowledged for work they continue to do to prepare students for the labour market and their entry into higher education.

The results of the CSEC have shown noticeable improvement over last year’s, the education minister said, noting that the pass rate in mathematics has moved from 28.44 per cent in 2013 to 47.03 per cent in 2014

“While this is dramatic and a cause for joy, we must be cautioned to measure this success against the backdrop of the challenges which exist in the global arena where mathematical literacy is premium and indispensible in development,” Miguel said.

She said that in Asia, for example, students’ performance in science, technology, engineering and mathematics (STEM) is excellent and ranks at the top of the global scale.

The performance of students in mathematics in the United States, however, has fallen below past standards and one can see the impact of this decline on economic development in the region, she further stated.

“Let us therefore, as a Caribbean region, focus on improving our students’ learning and performance, not only in mathematics, but also in the STEM subjects, in order to position the region strategically in the global arena. Remember, we are not competing in this small crucible, which is the Caribbean Basin, but in the whole globe, which is the developed world.”

Miguel also pointed out that the overall pass rate in English language increased from 58.92 per cent to 61.54 per cent.

“This is a modest improvement on which we must continue to build if we are to compete meaningfully, not with ourselves, but, with the world.

“While 71 per cent of the cohort was awarded passing grades at CSEC, it must be noted that only 41.7 per cent gained passes in five subjects, including mathematics, and English A. Naturally, as a ministry, we need to examine the registration data very carefully to ensure that all of the students in the cohort were actually registered for both subjects at the CSEC level,” Miguel said.