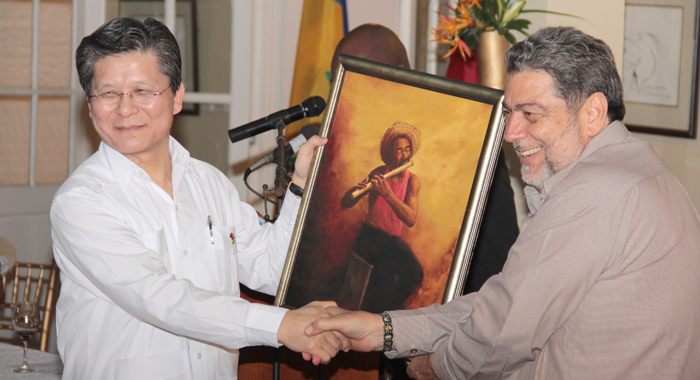 Taiwan’s ambassador to St. Vincent and the Grenadines, Weber Shih, will conclude his tour of duty on Aug. 30, having completed his “special mission” in this country.

“Four years ago, I came to this beautiful country with a special mission, among others, to materialise the pledge to build the passenger terminal of the Argyle International Airport,” Shih said last week at a reception hosted by Prime Minister Ralph Gonsalves in his honour.

“Over the years, I have had the honour to witness the signing of the construction agreement between IADC (International Airport Development Company) and OECC (Overseas Engineering and Construction Co. Ltd.), to observe all stages of the construction, and more importantly, to hand over the completed project to the Honourable Prime Minister and to see it standing tall as a landmark of the island,” Shih said.

The Taiwan-funded terminal building was handed over to the government last December, at least one year ahead of the projected completion date of the EC$700 million airport.

Shih, however, said that during his stint his embassy paid no less attention to other areas of co-operation in SVG, such as infrastructure, agriculture, education, information communication technology, healthcare, and cultural exchanges.

“… for the result we have delivered, I want to offer my special thanks to the leadership of the Honourable Prime Minister and the joint efforts of our Vincentian colleagues,” Shih said.

Shih will become secretary-general of his country’s International Cooperation and Development Fund (TaiwanICDF).“I look forward to continuing my efforts to promote our existing project cooperation,” he said.

Shih also announced that his successor will arrive in Kingstown on Sept. 12.

“It is my sincere hope that you can accord him the same level of assistance and support as you have so graciously afforded me. In closing, I wish the continued prosperity of our country and the everlasting friendship between our two peoples,” Shih said at the reception.

“As much as we are sad to see the ambassador go, we know that he is going to get a promotion and it is always good to have friends in high places,” Sen. Gonsalves said.

He noted that one of the first acts of independent SVG in foreign affairs was to establish diplomatic relations with Taiwan.

Sen. Gonsalves noted that then Prime Minister Robert Milton Cato opted to recognised Taipei rather than Beijing, which considers Taiwan a renegade province to be reunited with the mainland by force if necessary.

Sir James, Eustace, and Gonsalves attended the function, one of the rare occasions when all three surviving prime minister are present at a single event.

He said the relationship with Taiwan has proven to be one of the pillars of SVG’s foreign policy and one of the corner stones of our national development.

“Taiwan has touched the fabric of St. Vincent and the Grenadines in a number of ways, and it is impossible for me to list all of the ways.

“I think that of all the ambassadors — and it’s not to compare them — Ambassador Weber Shih has understood the islandness of St. Vincent and the Grenadines to a very great extent.

Sen. Gonsalves said that while Taiwan is now a developed country, it still has vivid memories of when it was developing nation and required the assistance of other nations to develop.

“And it is that recent memory of their own developmental struggles that informs their friendship and solidarity with St. Vincent and the Grenadines today, because they have recently trod the road that we now trod.

“And in that friendship, in that exchange, it has not been a one-way street. St. Vincent and the Grenadines, at every opportunity, has accepted the role of champion of Taiwan’s interest and causes in a number of international fora that Taiwan is unjustly excluded from.”

Sen. Gonsalves pledged Kingstown’s continued solidarity and advocacy for Taiwan, and expressed confidence that Taipei will continue in its own support of the developmental aspirations of SVG.

“Because, although it is said in international relations there are no permanent friends, only permanent interest, we think we have discovered today a very obvious exception to that rule, because Taiwan is indeed our permanent friend, and I hope that our friendship continues to grow.

“Ambassador Weber Shih, I am truly sorry to see you go. You have served your nation and our nation with distinction. It has been an honour to have you in our shores and we look forward to meeting you as you are elevated to your new position and I know you will continue to work on behalf of St. Vincent and the Grenadines,” Sen. Gonsalves said.

Eustace said the relationship with Taiwan is “always there, always honoured, always respected.

“But the reality is that we have a loving relationship, a respectful relationship that often goes beyond the boundaries of simple diplomacy and democracy. It is a very special relationship, which we do not find in many of our other diplomatic relationships, because it goes beyond diplomacy. It has become part of us as Vincentians and Taiwanese, as citizens of the world, as human beings who share common interest and a common democracy,” Eustace said.

He said the contribution of Taiwan to the economic, social, and political development of SVG cannot be doubted.

“And I am extremely grateful to the ambassadors that have come one after the other here to St. Vincent and the Grenadines to represent Taiwan. And Ambassador Shih is no exception to the rule, and I want to compliment him in that regard.”

Eustace said he was confident that Kingstown-Taipei ties will blossom even further given Shih’s new post as head of TaiwanICDF.

“He is not one of those ambassadors who we may not hear about or see again. I am sure that at least we will hear from him in his new capacity and I am looking forward to that, Ambassador,” Eustace said and congratulated the ambassador on his new appointment.

“We live today in some very difficult times and one cannot gainsay in anyway the fact that Taiwan has played a major role in our development as we try to chart and go through the rough seas of today’s world. I try to imagine what it would have been like if we did not have benefits and support from Taiwan and countries outside of St. Vincent and the Grenadines.

“For me, I am speaking very frankly here, there is no other relationship we’ve had that can match the one we have with Taiwan. This is no insult to any other country, it is a reality that we live; it is a reality that we face day after day. All of us know it, all of us appreciate it, and we say to you, Ambassador and to your country, thank you very much, and we look forward to hearing from you in your new capacity and may God go with you as you move back to Taiwan,” Eustace said.

Sir James told the reception that when his New Democratic Party was elected to office in 1984, his orientation then was to recognise China rather than Taiwan.

He said he was influenced by then prime minister of St. Lucia, John Compton, to recognise Taipei.

“He influenced me to make that decision and I don’t regret it,” Sir James said.

The retired politician said Taiwan has not always gotten it right, adding that their rice and shrimp experiments in SVG failed.

He further said that in 2006, when Sir John was re-elected to office, he encouraged the now deceased leader to switch ties back to Taipei.

“I said, ‘Remember, you the one who pushed me to Taiwan. I am now repaying the favour.’ I am carrying you back to Taiwan. And so it was, St. Lucia became again a country recognising Taiwan,” Sir James said, adding that other Caribbean leaders were working to get Castries to maintain ties with Beijing.

And, Prime Minister Gonsalves told the gathering that he wanted “at the outset to put on record our profound gratitude, our thanks, to His Excellency Weber Shih for his immense contribution to our country’s development and to the strengthening of the relations between St. Vincent and the Grenadines and the Republic of China (Taiwan)

“It I important for us to say thanks and to show gratitude always,” Gonsalves said.

He noted Taiwan’s contribution to infrastructural development in SVG, including roads, bridges, the Union Island Airport, the Vegetable Market in Kingstown, and Argyle International Airport.

“But among the more profound manifestations of our very strong links of solidarity is the people-to-people links,” Gonsalves said.

“For generations to come, the farmers across this country will speak of Taiwan’s contribution to our farming. They (Taiwanese) do not always get it right, they don’t pretend to be perfect, the got rice wrong, but they got pineapples quite right, they got the tissue culture for a wide range of commodities, including bananas and several root crops, and they got wax apple right,” Gonsalves said.

Gonsalves said half a dozen Vincentian farmers recently went to Taiwan to look at farming technique there, and noted that about 50 Vincentians are students in the Asian nation, while about 30, most of whom speak Mandarin Chinese, have already graduated.

“This people-to-people relationship is what is going to live in the hearts and mind of the families and the country as a whole,” he said.

Gonsalves, who has ministerial responsibility for economic affairs, said Taiwan is the 27th largest economy in the world, but added that in the 1950s, Taiwan was “an undeveloped, backward, agricultural country.

“It is now high-tech, and it has been done because of knowledge, and that is why it is so important that when we work with a country like Taiwan we learn important lessons from the relationship,” he said.

“Ambassador, you have been a good friend to us. And your recent acts of friendship after the December natural disaster is one, which will remain with us always,” Gonsalves said, in reference to Taiwan’s assistance after the Christmas eve trough system which left 9 persons dead, three missing, and EC$330 million (17 per cent of GDP) in loss and damage.