SVG to export 40ft containers of root crops to the UK 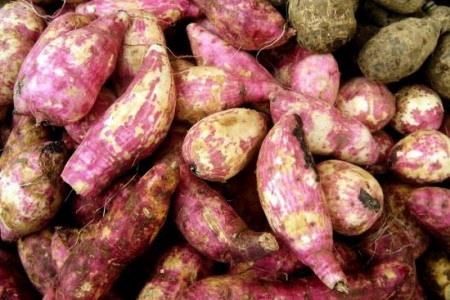 Six containers of root crops will be exported weekly.

As part of the diversification of the agricultural sector, the Ministry of Agriculture has signed a memorandum of understanding with Winfresh for the export of six 40-foot containers of root crops to the United Kingdom weekly.

A three-member team from Winfresh, including its Chief Executive Officer (CEO) Bernard Cornibert, Procurement Officer Phil Collins and Purchasing and Logistic Manager Cuthbert Joseph visited St Vincent and the Grenadines (SVG) on a two-day mission, which wrapped up today.

Minister of Agriculture Saboto Caesar said the visit shows the commitment of both the Government and Winfresh to increasing the exports of agricultural produce to the UK.

Caesar said both parties are cognizant that market access is critical for growth in the agricultural sector.

He noted that visits will be made to several dasheen, sweet potato and ginger farmers as a part of the effort to create the farmer base necessary to facilitate the export to the UK.