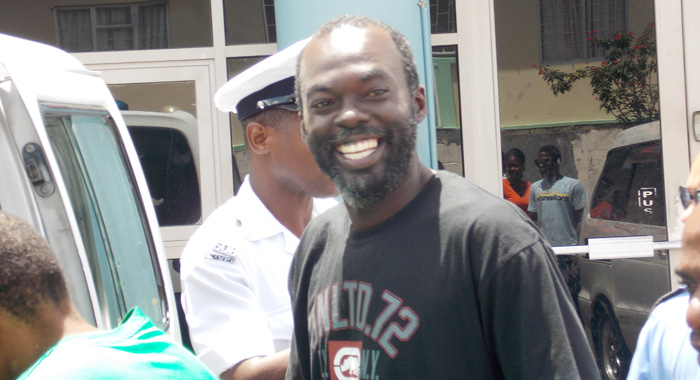 District 1 magistrate Rechanne Browne-Matthias on Tuesday issued a Removal Order for Trinidad national Sheldon Bess who appeared before her at the Kingstown Magistrate Court on a charge of illegal entry.

Bess was arrested at Fitz Hughes by a patrol squad from the Rapid Response Unit (RRU) on Saturday — seven months after immigration officers denied him entry on arrival at E.T. Joshua Airport.

Bess, who was deported in 2009 following the dismissal of a drug charge, pleaded guilty to the illegal entry charge on Monday.

The prosecution told the court that officers from the RRU were on patrol in North Leeward on Saturday, when they received information that two Trinidadians were staying at a home of one Clement Patterson in Fitz Hughes. As they proceeded to the area, they were also informed that Bess was seen running from Patterson’s home toward the sea. The law officers pursued and caught him.

The prosecutor, ASP Glenford Gregg, also told the court that when questioned Bess told the law officers his name was Sheldon Bess of Trinidad and Tobago and that he arrived in the state on June 13, 2014, and was granted stay until October 2014. But, when they requested his passport he could not produce it. He was subsequently handed over to the Immigration Department.

The court also heard that when Bess was cautioned by an immigration officer on Monday, he said that he arrived here via a LIAT flight in January 2014, and was given six months stay in the country. But, when the records were checked, they showed that he arrived in the country on Jan. 13, 2014, but was denied entry.

The prosecution said Bess subsequently admitted entering the country on June 1, 2014, without the consent of an immigration officer.

Bess told the court Tuesday that he was arrested and charged for trafficking 20 pounds of marijuana in 2008, but during the trial a no-case submission was upheld and the charge against him was dismissed.

Magistrate Browne-Matthias told Bess he could apply to the Chief Immigration Officer for permission to enter the country and explain to them that he has a child here. She said that with the freedom of movement under the CARICOm arrangement, Bess can “do the right thing” and produce the relevant documents such as birth certificate and police record.

The prosecution said the Immigration Department has informed Interpol of Bess’ arrest and whereabouts.

One reply on “Deported Trinidadian charged with illegal entry”