Activists call for public’s help in ending violence against women 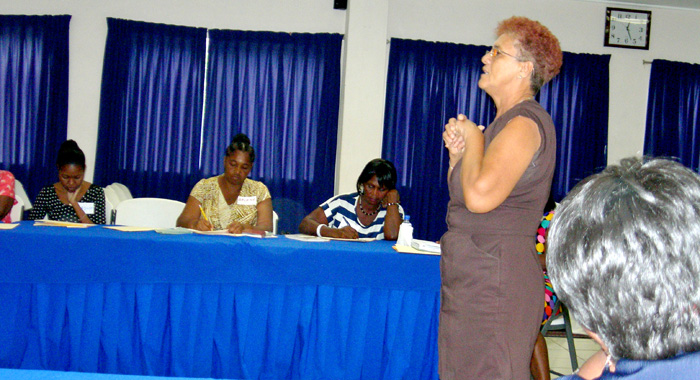 Facilitator Jeanie Ollivierre and attendees at the NCW leadership workshop.

Social activist Jeanie Ollivierre is pleading with the public to take action to end violence against women, saying this is “everyone’s business”.

This call to be vigilant and help victims was lamented by Ollivierre at a recent National Council of Women’s (NCW) leadership workshop.

Ollivierre, who was one of the facilitators at the seminar, chided the public of turning a blind eye, and said more needs to be done to address the issue of violence against women.

The head of the social services agency, Marion House, explained that too often people who intervene on the behalf of victims are castigated as being nosey and “looking for commess (gossip)”.

She, however, pointed out that under the Belem Do Para Convention, which was officially established in 1995 and which this country signed unto in 1996, members of the public have the responsibility to speak and act on behalf of victims.

Ollivierre pointed out that the convention affords citizens the right to take legal procedures on behalf of victims as far as the international level and called on persons to exercise their civil liberties.

Meanwhile, trade unionist and educator Joy Mathews, who was another facilitator at the event, spoke on the topic “Empowering Women for Leadership”.

Matthews pointed out various leadership styles and called on women to know their strengths and weaknesses in their approach to management. She said this could determine their effectiveness in higher government and business sectors.

In her remarks as President of the NCW, Beverly Richards emphasized that while it is important to focus on empowering women, it is also necessary to include males in the education process since many of them were the perpetrators of violence against females.

She said persons in the society “must seize the opportunity to be a voice to call out evil, condemn corruption and end exploitation” particularly against young girls and women whose issues and voices could become stifled because of their inability to express themselves.