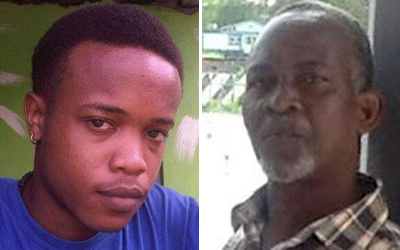 Ricardo Haynes, left, and Grafton Richards were killed in Glen on Sunday.

A 16-year-old student was among at least six persons arrested by police in St. Vincent and the Grenadines on gun related offences over the last two weeks or so.

The arrests were made even as five persons were shot, two of whom died, in a single incident in Glen on Sunday, taking the homicide count this year to 28.

Police said on Monday that Romando Andrews, 22, a labourer of Stubbs, was arrested and charged with possession of one round of 12 gauge ammunition without a license issued under the Firearm Act, at Stubbs on Aug. 17.

On Aug. 28, 40-year-old farmer Maxwell Chapman, 16-year-old student Isaiah Spencer, and 22-year-old farmer Calvert Harry, all of Green Hill, were arrested and charged with possession one 9mm pistol, without a license issued under the Firearm Act, at Green Hill on Aug. 28.

Ronald Audain, 29, a labourer of Barrouallie, was arrested and charged with possession of one .45 pistol and five rounds of .45 ammunition, without a license issued under the Firearm Act, at Keartons on Aug. 26.

On Aug. 29, Urban Lampkin, a 28-year-old unemployed Chateaubelair resident was arrested and charged with unlawfully and maliciously wounding Disney Harry, a 28-year-old labourer of Barrouallie, by shooting him on his right leg.

Meanwhile, police said in their bulletin on Monday that five persons were shot in the incident at Glen around 9:30 p.m. Sunday, in which two persons died.

Initial reports were that four persons were shot.

Dead are Recardo Haynes and Grafton Richards. Police say both men were playing dominoes at Richards’ shop when two masked men opened fire at them.

They sustained several gunshot wounds about their bodies and later died.

Postmortem examinations are expected to be performed on the bodies.

Three other persons were injured in the incident and were up to Monday still in hospital, police say.

The death in Glen follows on the shooting one week earlier of Prak Hill farmer 64-year-old Charles Ryan, who died after being shot on his way home on Aug. 22.

9 replies on “3 killed, 4 injured, 6 arrested on gun charges in two weeks in SVG”