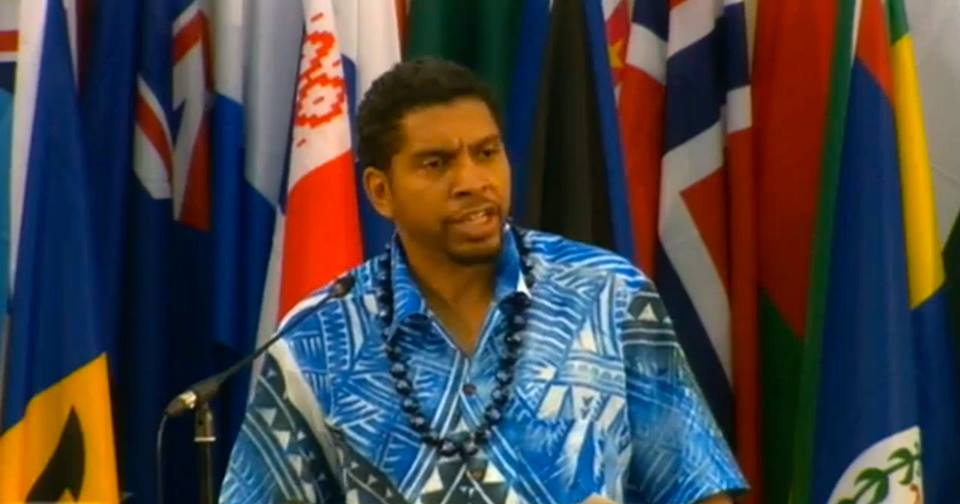 APIA, Samoa (CMC) – St. Vincent and the Grenadines has lamented what it regards as the “initial indifference, paternalism and outright antipathy” towards Small Island Developing States (SIDS), saying that they “continue to lurk beneath the thin veneer of diplomatic formalities”.

Addressing the United Nations Third International Conference on Small Island Developing States, Foreign Affairs Minister Sen. Camillo Gonsalves said the erroneous view that SIDS should be observers, and not participants, in important matters of international relations “is self-evident in our underrepresentation or outright exclusion from the inner sancta of decision-making bodies” on various issues.

Gonsalves said these slights beg the question of whether some powerful states would prefer that developing countries “subsist as full members of the UN in name only, enjoying the legal fiction of sovereign equality, while remaining observers to a geopolitical drama in which we can neither meaningfully act nor contribute to scripting the outcomes”.

However, he urged participating countries to “reject those jaundiced perspectives and state with clarity and confidence that our time is now.

“Not for an episodic, once-per-decade engagement, but for a sustained and sincere restructuring of an outmoded one-size-fits-all approach that serves to diminish our nobility and retard our developmental aspirations,” he said.

The St. Vincent and the Grenadines foreign minister also called for an immediate end to what he described as “the practice of using per capita GDP (gross domestic product) as a obstacle to any form of developmental assistance or relief to Small Island Developing States.

“It is only then that a truer picture of our needs and possibilities can emerge. The time for such a reform is now.”

Gonsalves said SIDS’ developmental aspirations and manoeuvres are straight-jacketed by an acute absence of fiscal space.

“How can we address myriad climate challenges, the transition to modern modes of production, the adoption of renewable energy, the strengthening of our social safety nets, or the equipping of our citizens to meet tomorrow’s challenges, while managing a debt burden that is among the highest in the world?

“Debt forgiveness, debt for climate swaps, and debt relief based on the magnitude of exogenous shocks are unavoidable elements of any serious SIDS-centred development discussion,” he added.

Gonsalves said the “myopic refusal of international financial institutions and their funders to squarely confront SIDS’ debt burdens can only yield disastrous consequences”.

He said SIDS’ steady developmental progress will be halted and reversed unless there is international cooperation to lighten the Sisyphean boulder of debt that we have been condemned to push ever uphill.

“Debt restructuring, not structural adjustment is the urgent requirement of SIDS’ economies in the wake of the global financial crisis. The time for such restructuring is now.”

Gonsalves said while Caribbean SIDS have, by and large, been experiencing anaemic post-crisis growth, their GDPs have been “battered with regularity and ferocity by the impacts of climate change”.

He said over the last four years St. Vincent and the Grenadines experienced “four distinct climate anomalies” from flood to drought to hurricane?, stating that each produced, on average, “double-digit hits” to the country’s GDP.

We are, frankly, tired of telling major emitters that climate change is an urgent problem, an existential problem, the defining challenge of our times.

We are tired because the response to our alarms has been hollow promises, crocodile tears and studied indifference to the root causes of our distress, he added.

To date, Gonsalves said the response of major emitters amounts to a “reckless and almost criminal disregard of the consequences and obligations of their actions.

“Their continuing refusal to meaningfully mitigate their emissions constitutes an act of aggression and climate warfare against Small Island States and our populations,” he declared.

The foreign minister said while SIDS this year call for “real and substantial commitments of climate financing for mitigation and adaptation,” next year they “demand and expect firm and legally binding commitments to emissions targets that will ensure our continued existence”.