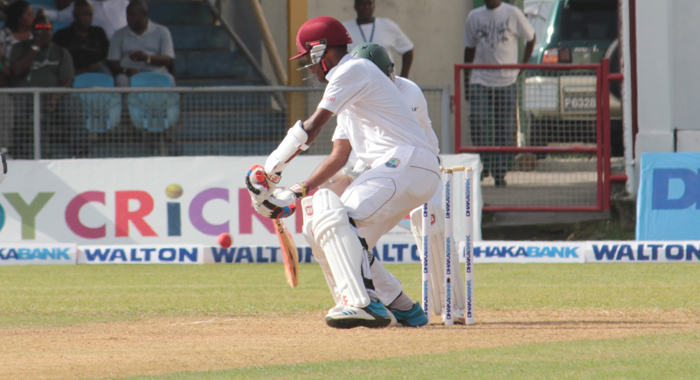 Kraigg Brathwaite drives through the covers to bring his century. (IWN photo)

The West Indies, behind a second test century from opener Kraigg Brathwaite, ended day one of the opening test against Bangladesh, which ended four over before the scheduled end with a sharp downpour in the Dhaka Bank Series in a strong position on 264/3.

The young Barbadian opener batted all day in an assured manner to be 123. At the close and with him was veteran middle order batsman Shiv Chanderpaul on 1.

Chanderpaul, in is 157th test match, had come in to replace Darren Bravo (62) who went six overs from the close.

Brathwaite has so far struck 8 fours and faced 263 balls and batted 330 minutes. He brought up his milestone when he drove a juicy full toss from Mahmudullah to the cover boundary just after 3:30 p.m.

He and Bravo came together with the total on 133/2 after the out-of-form Kirk Edwards was taken at silly mid on for 10 and added 128 for the third wicket.

They appeared in little trouble from what looked a toothless Bangladeshi attack with the only threat of a dismissal coming from some uncertain running between the wickets and ill-advised horizontal bat shots on the slow wicket.

But having done all the hard work, Bravo, not for the first time, gave his wicket away by hitting a lofted drive to midoff, where Mahmudullah took a smart catch falling forward and to his left off spinner Taijul Islam (2/69).

Earlier, Brathwaite had added 116 with Chris Gayle (64) before the latter was given out LBW off Shuvagata Hom (1/76) on review after the initial decision was not out.

Gayle struck 10 fours and 1 six and looked set for a big score.

One reply on “Braitwaite century drives Windies on day one”