Windies still ahead despite losing wickets 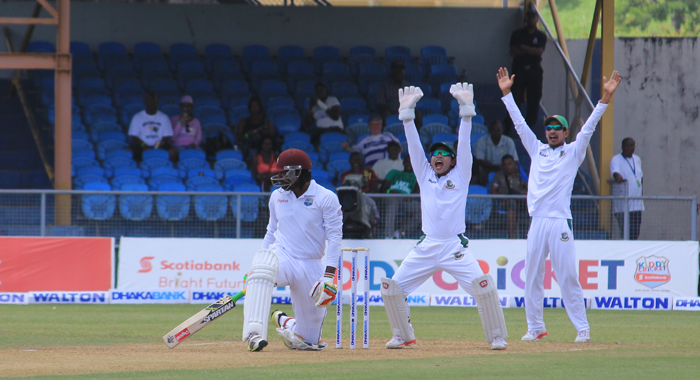 Bangladeshi players appeal as a Shuvatata Hom delivery hits Chris Gayles pad. He was later given out LBW on referral. (IWN photo)

Despite losing two quick wickets in the post lunch session, the West Indies remained in the ascendancy thanks to an unbeaten half century from obdurate opener Kraigg Brathwaite at tea on the opening day of the first Dhaka Bank test match against Bangladesh at the Arnos Vale Playing Field in St. Vincent.

The Barbadian, who batted through the two sessions, was on 89 and with him was Darren Bravo on 17 as the host ended the period on 182/2 off of the 59 overs sent down so far.

In the session, which saw a rain delay of 13 minutes, the West Indies lost opener Chris Gayle (64) and Kirk Edwards (10) in the space of 17 runs to the spinners.

Gayle, who had gone to the break on 61, added just three before he was given out LBW to debutant offspinner Shuvagata Hom (1/44) after missing a sweep shot. He was given out on review after being given not out initially by umpire M Erasmus. The score was then 116/1.

It was 133/2 when Edwards, who had pulled his first ball a longhop from Hom to the long-leg boundary, then lofted the same bowler for 6 over long on was smartly taken by Mominul Haque at silly point off the bowling of the other debutant, Taijul Islam (1/49).

Earlier, openers Gayle and Brathwaite had batted confidently to take the West Indies to 103 without loss at lunch.

Gayle, who started somewhat shakily, had gone to lunch unbeaten on 61 and Brathwaite on 40 in giving the Windies the type of start they would have been hoping for in good batting conditions after losing the toss.

Gayle, whose form coming into the test was not of the best, overcame some early anxious moments when he played a missed on a few occasions. He, however, settled and set about building the foundation for a long innings and looked ominously at ease at the interval.

Earlier the West Indies had omitted Jason Holder and kept burly pacer, Shanon Gabriel from their final 11 while Bangladesh had given a debut to left-arm spinner Taijul Islam and offspinner Shuvagata Hom.

A total of 29 overs were bowled in the session, which was disrupted for five minutes by a sharp shower just on the hour.

2 replies on “Windies still ahead despite losing wickets”