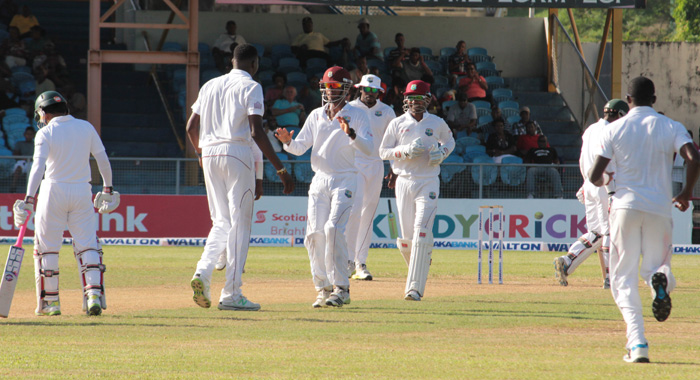 Sulieman Benn, who took 5 wickets for the Windies, being congratulated by teammates (IWN photo)

The fourth day of the Dhaka Bank test match between Bangladesh and the West Indies at the Arnos Vale Playing Field in St. Vincent promises to be one of great interest after the home team earned a lead of 302 at the end of day three, which was witnessed by an appreciable crowd.

After declaring their first innings at 484/7, the West Indies, behind a 5-wicket haul from left-arm spinner Suleiman Benn, shot out the visitors for 182 on the stroke of close of play, but did not declare their intentions.

Benn, using his 6 foot 5 inches height, created problems with length and variation for the impatient and low confidence Bangladesh batsmen, few of whom played him with much assurance.

Mominul Haque (51) once again showed his class with a workmanlike half century, while captain, Mushfiqur Rahim (48*) was left high and dry, two short of a 14th half century.

Haque and Shamsur Rahman (35) had joined forces in a 62-run third wicket partnership after their team were on the ropes at 18/2 in the seventh over. They had come together after the experienced but out of form Tamim Igbal (1) and Imrul Kayes (9) had been sent back through loose shots and well caught at slip by Darren Bravo, Igbal off of Roach and Kayes off Taylor.

Rahman who appeared to have come to terms with Benn’s bowling went with the score on 80 when he played away from his pad edged to Bravo at slip for the fieldsman to snare his third catch. He would take two more later in the innings.

Rahman had struck 5 fours in his 95 ball stay at the crease and could have lost concentration owing to a short rain break, which sent the players scampering off the field just before tea.

The next to go was Haque, who was adjudged caught down the legside by wicketkeeper Denesh Ramdhin off the erratic Shannon Gabriel on the stroke of tea. He reviewed the decision, but with no conclusive evidence for the umpire to overturn his decision he had was to go.

Haque who experienced some early anxious moments struck 7 fours in his 51, which lasted 152 minutes and 112 balls. The next wicket was not part of the script but a late insertion, which was accepted as a scene worth having.

Ramdhin, in the absence of a second spinner which many in hindsight felt should have been selected, threw the ball to part-time offspinner Jermaine Blackwood and with many eyebrows still raised, the Jamaican struck gold as he trapped Mahmudullah (7) in front with one which turned ever so slightly and slipped passed the prodding blade. That wicket then saw the visitors losing 3/13 in two overs.

Mushfiqur then added 29 with Shuvagata Hom (16) for the seventh wicket before the latter gave Benn a return catch to end the last bit of resistance from the lower order. The beanpole spinner then saw Bravo holding two more catches at slip off his bowling as he ended with figures of 5/30 off his 24.4 overs as the visitors last six wickets went for the addition of 72 runs.

Earlier the West Indies, who resumed on 407/3, went after quick runs in the 70 minutes and 17 overs they faced. Opener Kraigg Brathwaite (212) added just seven to his overnight score before holding out, while his overnight partner, Shivnarine Chanderpaul was on 85 when the declaration came — being not out for the 47th time — a record for a top order batsman .

In all, Brathwaite batted 554 minutes faced 447 balls and struck 14 fours. He added 161 for the fourth wicket with Chanderpaul, whose innings lasted 302 minutes and 226 balls with 7 fours.

The hunt for quick runs by the West Indies worked to the benefit of debutant left-arm spinner Taijul Islam who finished with 5/135 from 47 overs — the second Bangladeshi bowler to take 5 wickets at the Arnos Vale Playing Field, following Mahmudullah, who took 5/51 in the 2009 test victory.

It is on to day four with the prediction being that of the West Indies enforcing the follow on and positioning themselves to take a 1-0 lead in the two match series.