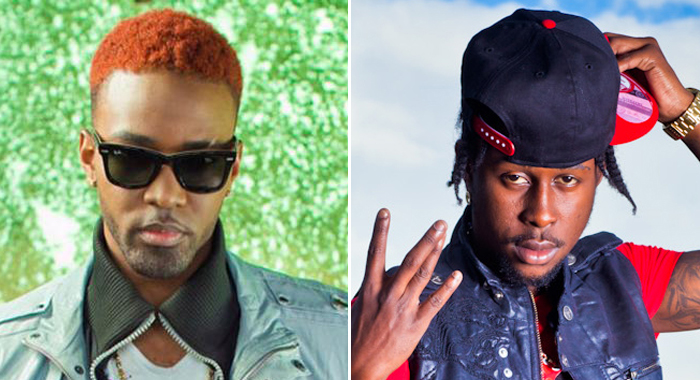 Jamaican artistes Koshen, left, and Popcaan will headline the concert.

On Sept. 25 — Arthur Guinness Day — the world pays homage to the founder of Guinness, the world’s number one stout, with a grand music celebration featuring some of the world’s best performers across global music genres.

While the AGD concert will be held in Jamaica, there will be a live simulcast broadcasted to approximately one million viewers across the      Caribbean, giving Vincentian consumers the opportunity to enjoy a remarkable event. This will be available for viewing in St. Vincent and the Grenadines at the Solidarity Car Park, Kingstown.

In Kingston, some of the Caribbean’s best artistes from reggae, soca and dancehall will converge at the National Indoor Sports Centre.

“This year Caribbean music stalwarts Lady Saw, Bugle, Mr. Killa, Assassin and our very own Skinny Fabulous will unite the Caribbean through music in memory of Sir Arthur,” London said.

She said there will be an admission fee of EC$20 to the event in Kingstown, and while young people are encouraged to attend the event, alcohol will not be sold to persons under the age of 18.

“Guinness has always sought to look after their consumers giving them even more in value, and in keeping with that tradition, we have implemented several trade activations. These activations will give consumers the opportunity to walk away with amazing Guinness prizes,” London further said.

Through Sept. 19, when persons submit six Guinness crowns (in an envelope with your name, address and telephone number into the specially marked boxes at trade outlets) they can be the lucky winner of a trip for two to Jamaica with VIP access to view the Guinness celebration concert there.

“In addition, throughout the month of September, consumers can enjoy Guinness two for $8 specials at their favourite bars and be on the lookout for the glamorous Guinness girls and win great prizes. Adding even more excitement to the month of September, with the purchase of a six-pack of Guinness at participating supermarkets, you instantly win a limited edition Guinness goblet,” London said.

Arthur Guinness Day is a global event with musical performances in 55 countries, including Ireland, Indonesia, Malaysia, Singapore, France, Spain, Italy, Australia as well as the Caribbean. The day has been celebrated since 2009 to mark the 255th anniversary of the signing of the lease at the St. James’ Gate Brewery in Dublin, Ireland.